Listen
You are here: Programs //   The Blues Show

from 7PM to Midnight on WXPN.

In the midnight hour after The Blues Show, on Blue Dimensions: Program #J42 — we'll dig into two new releases by exciting contemporary players and composers, and a posthumous release of the last studio session af a great figure in jazz. We have Rahsaan Barber's album Mosaic, a double-CD from this well-traveled saxophonist, which includes some guest appearances by his twin brother Roland Barber on trombone, and we'll also hear from the twin brothers' namesake, Rahsaan Roland Kirk. We'll also explore the latest album from vibrant vibraphonist Behn Gillece, which is called Still Doing Our Thing, his fifth album as band leader, Plus: a track from guitarist Larry Coryell from the new posthumous release Larry Coryell's Last Swing With Ireland, recorded in Dublin in 2016 less than a year before his death.

tickets for The Briggs Farm Blues Festival in July 2022 are now on sale
.


[Return To Top Of Blues Events]

"tune in" daily for online music from Clarksdale MS

Blues singer Anita White is still battling the band formerly known as Lady Antebellum over the name she has used for over three decades, "Lady A"   Report in Rolling Stone.

Blues harmonica player James Harman has died at age 74. Harman played harmonica with ZZ Top on a few songs and made a number of fine albums as band leader. More info.

Bob Koester founder of Delmark Records, the nation's oldest ongoing independent record label, which has issued top-notch blues and jazz records for more than six decades, has died at age 88. Read remembrance of Bob Koester from The Chicago Sun Times.

The Blues Foundation has rescinded Kenny Wayne Shepherd's nomination for a Blues Music Award. The decision to rescind the nomination followed continuing revelations of use of the Confederate flag on his "General Lee" car, and on his guitars.

The late Philadelphia blues singer Frank Bey was nominated for a Grammy in the "Best
Traditional Blues Album" category for his album All My Dues Are Paid.
read article on Frank Bey by Dan DeLuca in Philadelphia Inquirer March 13, 2021

The catalog of the famed Memphis-based record label Sun Records has been sold to a company that plans a new marketing initiative for the classic blues, rock 'n' roll, and country music that was issued on that label. [See more].

The movie Ma Rainey's Black Bottom is now being shown on Netflix. The film, based on a play of the same name by August Wilson, is about events surrounding a 1927 recording session with Ma Rainey known as the "Mother Of The Blues," and it stars Viola Davis and the late Chadwick Boseman in his final film role. It is produced by Denzel Washington. Reviews of the film and the performances of its stars have been very positive. View the trailer.

We are saddened to note the passing of Paul Patchel of Media PA on January 15th. Paul was active in the music scene around Media, and one of the main planners of annual music events including The State Street Blues Stroll, Roots Ramble, and Jazz By Night.
View Paul Patchel's obituary.

Joseph "Mojo" Morganfield, son of blues great Muddy Waters has died unexpectedly at age 56 in Chicago. Morganfield recently put out a single "It's Good To Be King," with an album planned for 2021.  read Mojo Morganfield's obituary.

The song "Clotilda's On Fire" on Shemekia Copeland's album Uncivil War tells the stories of the last ship to bring slaves to the United States, the descendants of those slaves, and the effort of the ship's captain to destroy the evidence of what it did. The wreckage of the ship has been found in Alabama. View Anderson Cooper's report on the Clotilda from CBS 60 Minutes.

Bluesman Jimmy Johnson turned 92 this November. You can view for free his concert with John Primer, Billy Branch, Dave Specter, and John Kattke, recorded last July. You may also support these artists if you would like to.

There's a new children's book about bluesman Blind Willie Johnson. It's called Dark Was The Night: Blind Willie Johnson's Journey To The Stars, named after one of Johnson's songs, a song that was included with the music and sounds of Earth sent into space on Voyager I in 1977, which is where the story starts in the book. It was written by Gary Golio and illustrated by E. B. Lewis.
Review of Dark Was The Night in The Houston Chronicle.

The Chicago Blues Camp is having Facebook Live online concerts that you can either watch live as they happen or later. Recent ones featuring 92-year-old Jimmy Johnson and Mud Morganfield, son of Muddy Waters, are well worth watching.

Working From Home is a series of at-home concerts by blues and roots artists produced by The Arhoolie Foundation and The Little Village Foundation. The concerts they have up include music from C. J. Chenier, The Sons of The Soul Revivers, Aki Kumar and Rome Yamilov, and John Blues Boyd.

Fantastic Negrito Have You Lost Your Mind Yet? [Winner]
Ruthie Foster Big Band Live At The Paramount
G. Love The Juice
Bettye LaVette Blackbirds
North Mississippi Allstars Up And Rolling

It's not really possible to precisely rank a whole bunch of great albums like these sensibly. What tiny difference makes the #18 album better than the #19 album? I've decided not to rank these in number order.

For the most part, this is just a list of some of the blues albums that have been played on the show in 2020, and they have made 2020 a good blues year, despite COVID-19. One thing of note — very possibly a result of the pandemic — was that there were a lot more singles issued this year than usual. Some are supposed to be on albums coming out in 2021. I'm including them in the albums list, but marking them as singles.

My top song picks for 2020 . . . of course, as with the albums above, the ranking of these isn't the result of some kind of perfectly precise, logical process. All of these songs added something important to the overall body of blues songs in 2020. Some certainly "packed a punch" — songs like "Clotilda's On Fire" from Shemekia Copeland, telling the story of the last ship to bring slaves to this country, which was burned and sunk to conceal what it did, or "All My Dues Are Paid" from the late Frank Bey, summing up his life in blues.

About The Blues Show and Jonny Meister

The Blues Show airs every Saturday night from 7:00 to Midnight on XPN. Host Jonny Meister explores this music and its history not only because it is the key ingredient in later rock and pop music, but also because of its own special allure and unique power as a style of music and expression of the human soul.

The Blues Show covers the entire history of the blues from 1920 to the present, from the best-known to the most obscure blues, with focus on the present-day blues, but with an eye on the rich history of this music and its large body of timeless recordings.

Host Jonny Meister has been playing the blues on WXPN since March 1977. Meister grew up with old blues records in the house. His father played boogie woogie on the piano, which Jonny learned at about the age of 12. Later he played in rock bands and did a few solo gigs as a singer-songwriter. As his interest in blues grew, he became especially interested in the history of the music, a history not always revealed by the rock musicians and their promoters who drew heavily on the blues.

Jonny spent a week with the family of the late, great blues musician J. B. Lenoir in 1979, and he was one of the consultants for the Wim Wenders film The Soul Of A Man which featured Lenoir, in the PBS film series The Blues. He won the "Keeping The Blues Alive" award for work in Public Radio for The Blues Show in 2000 and a "Best of Philly" award from Philadelphia Magazine in 1996 for "Best Local Radio Show".

Send Jonny an This email address is being protected from spambots. You need JavaScript enabled to view it.
about the show.

Check out some
Cool Blues Links 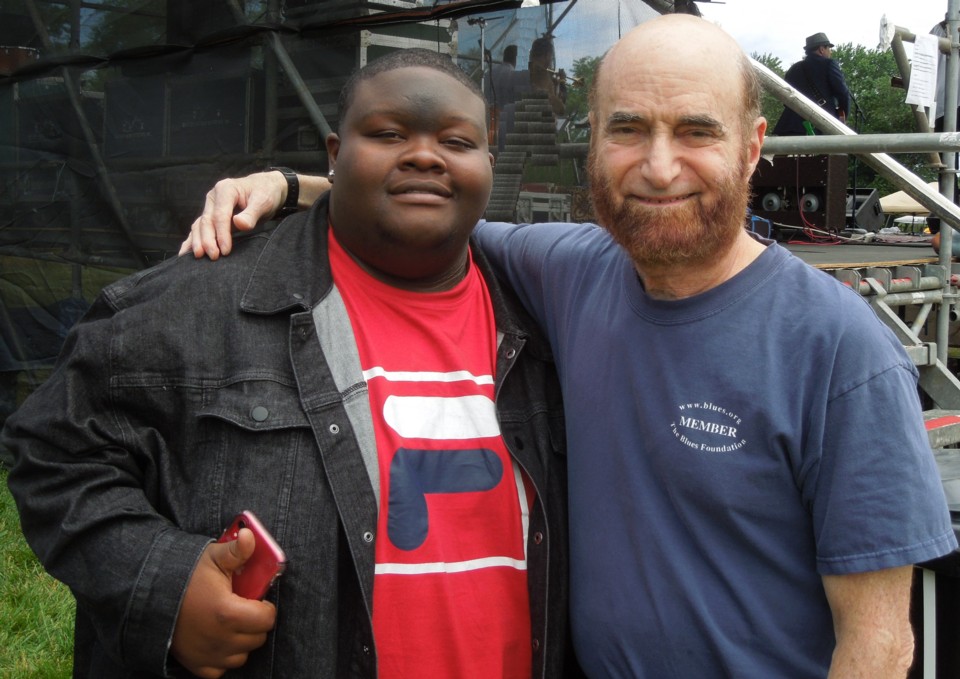 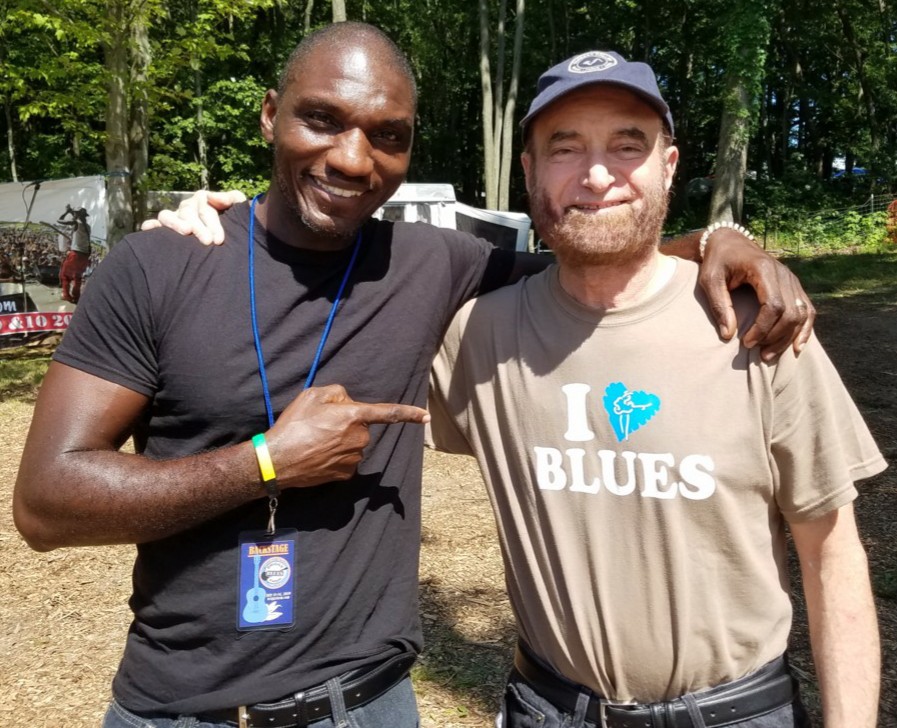 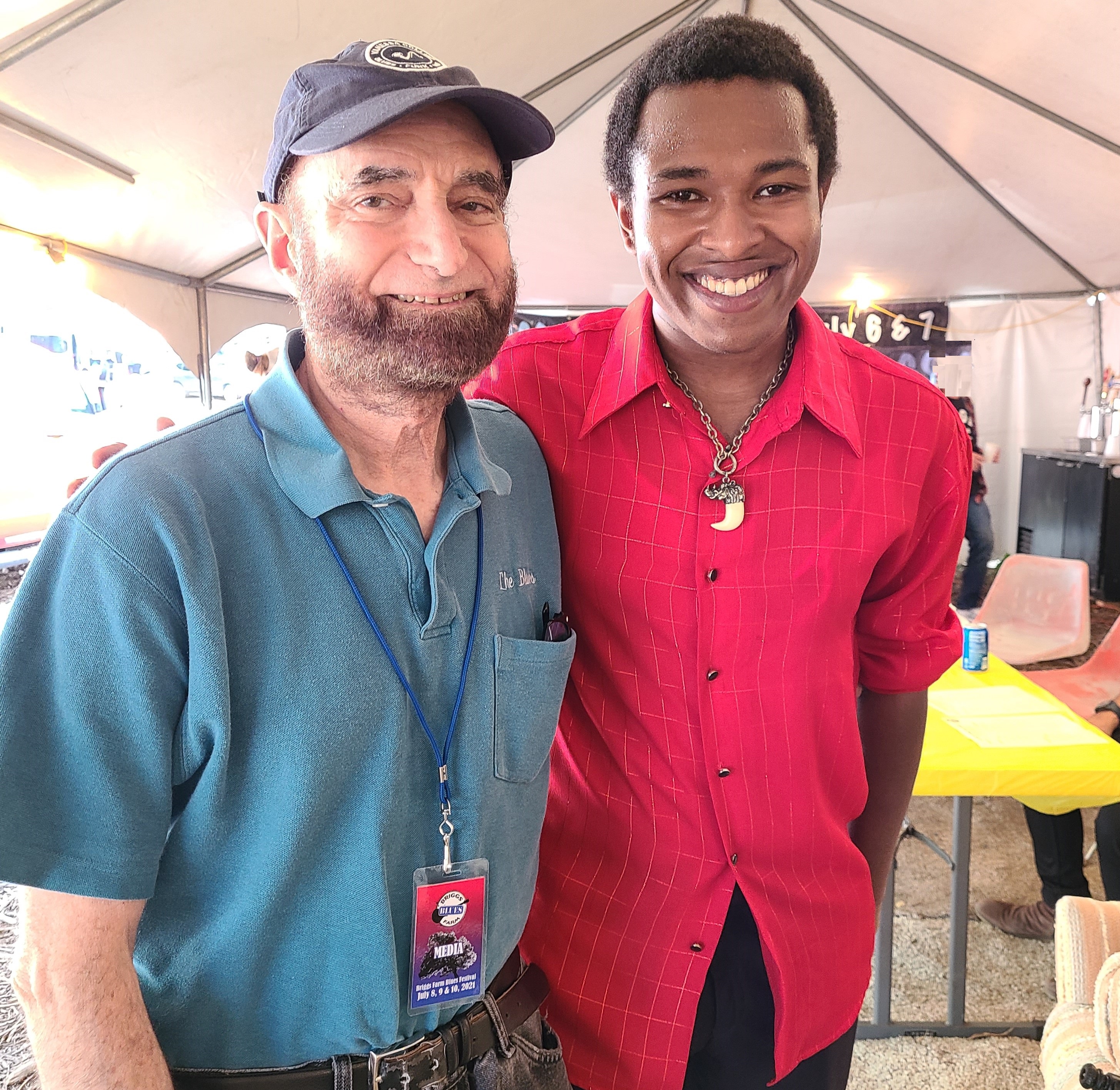 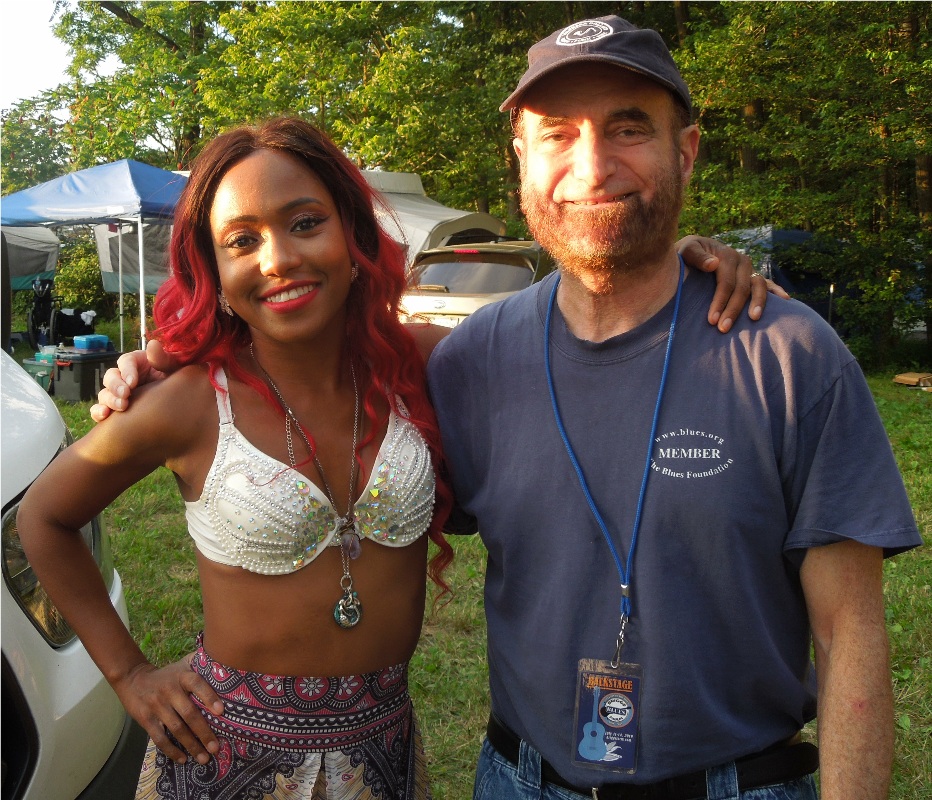 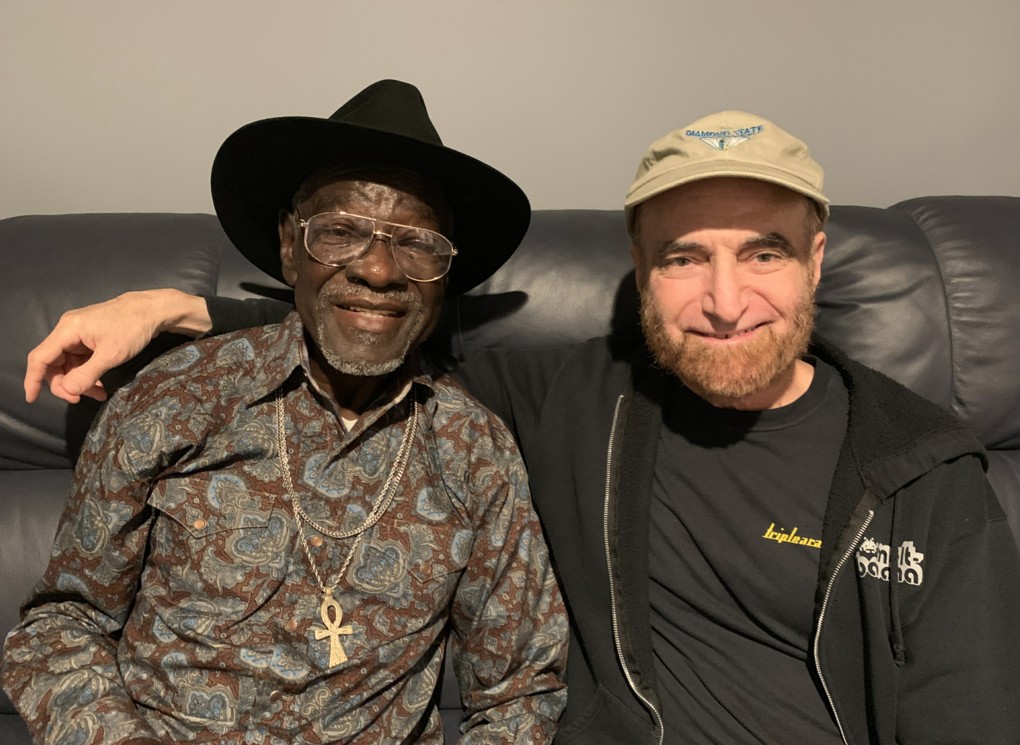 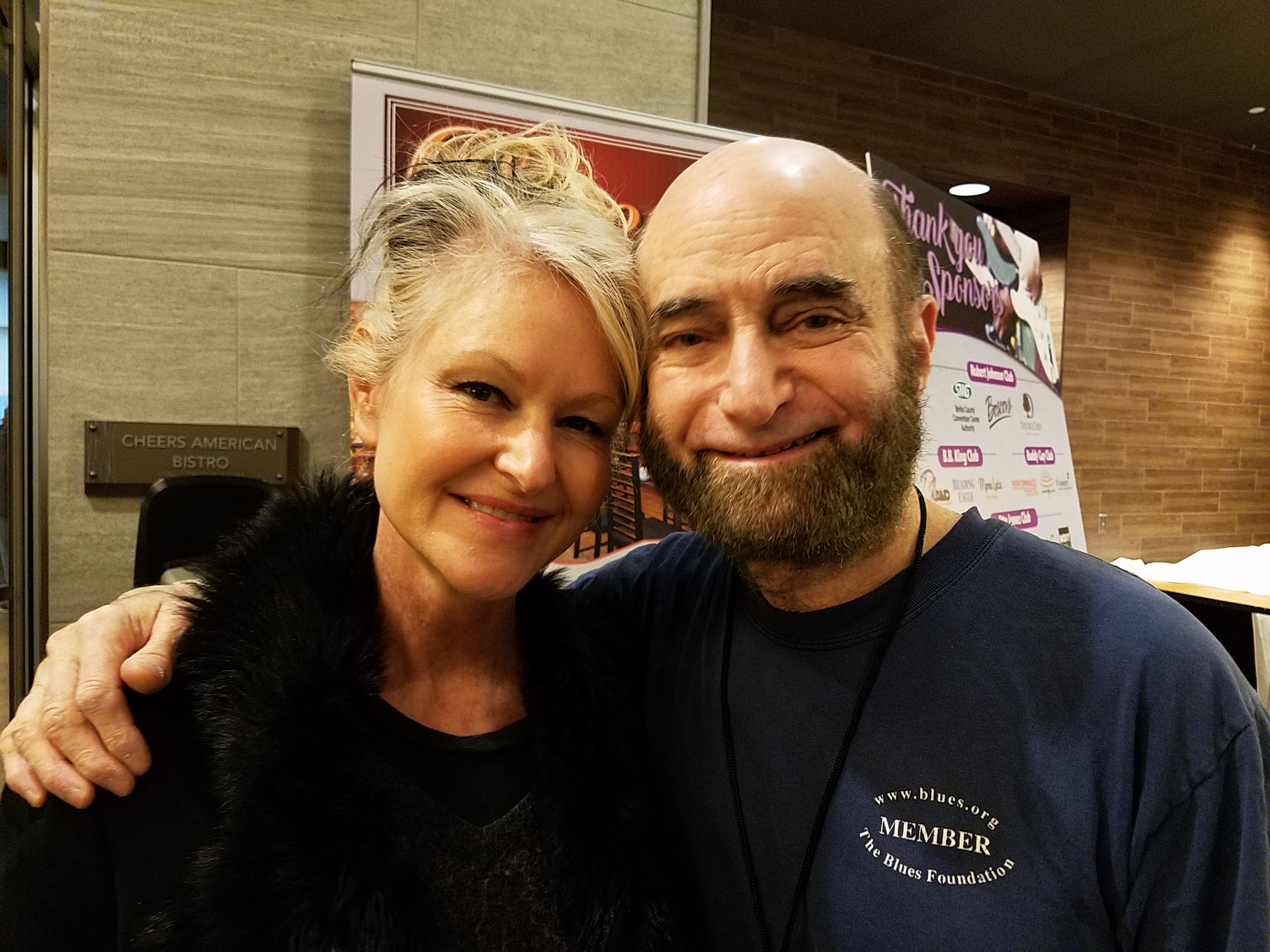 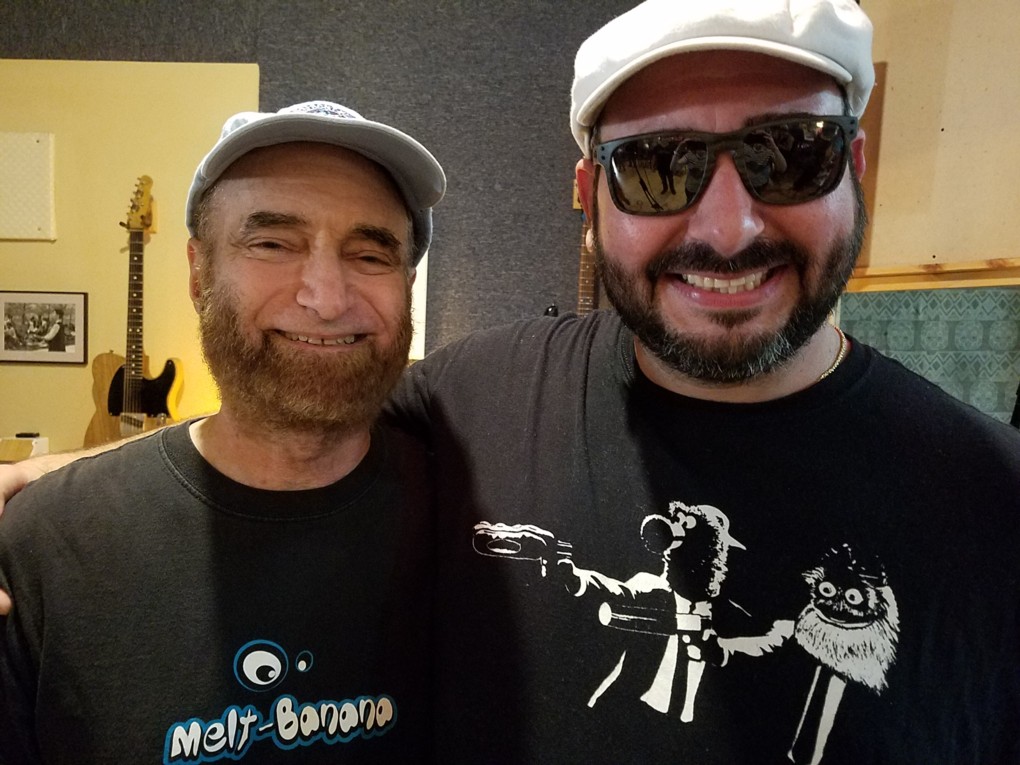 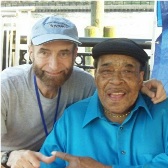 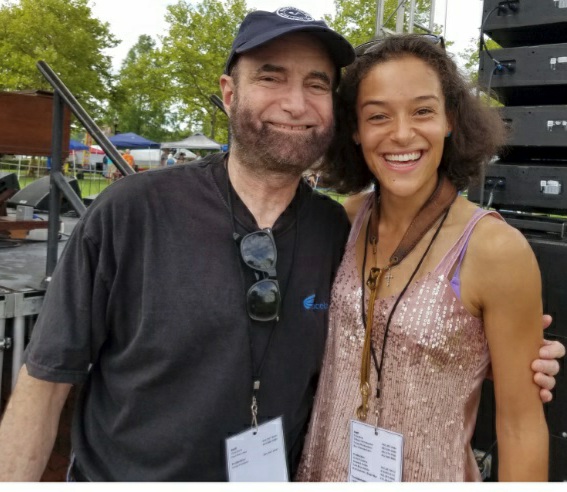 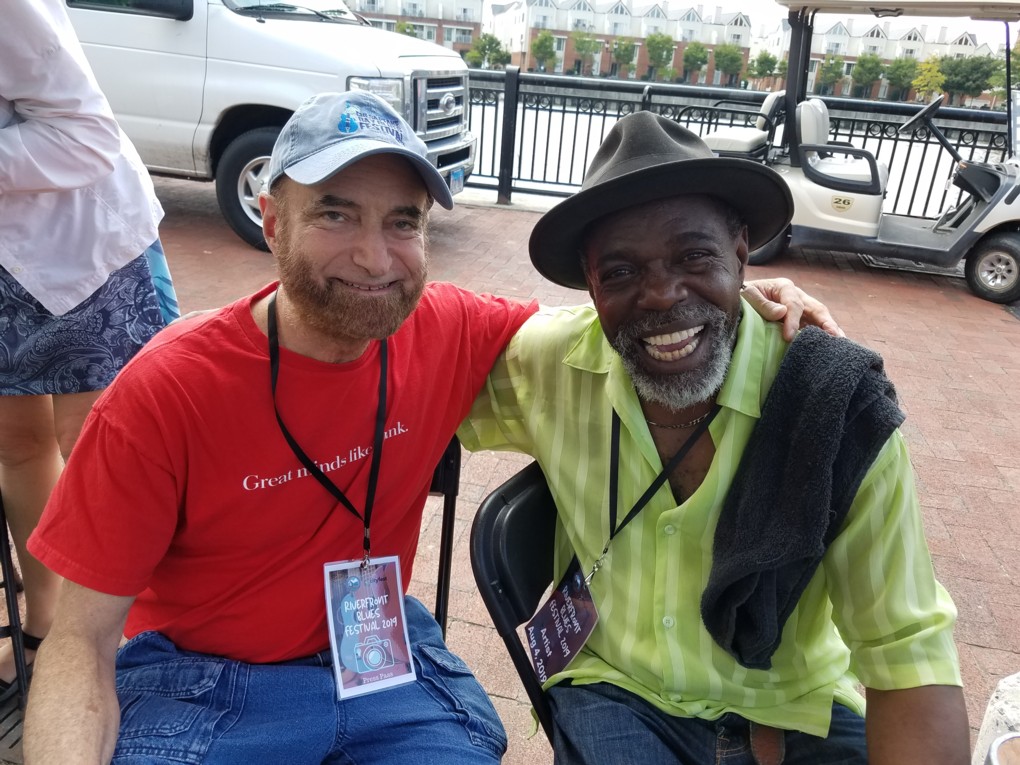 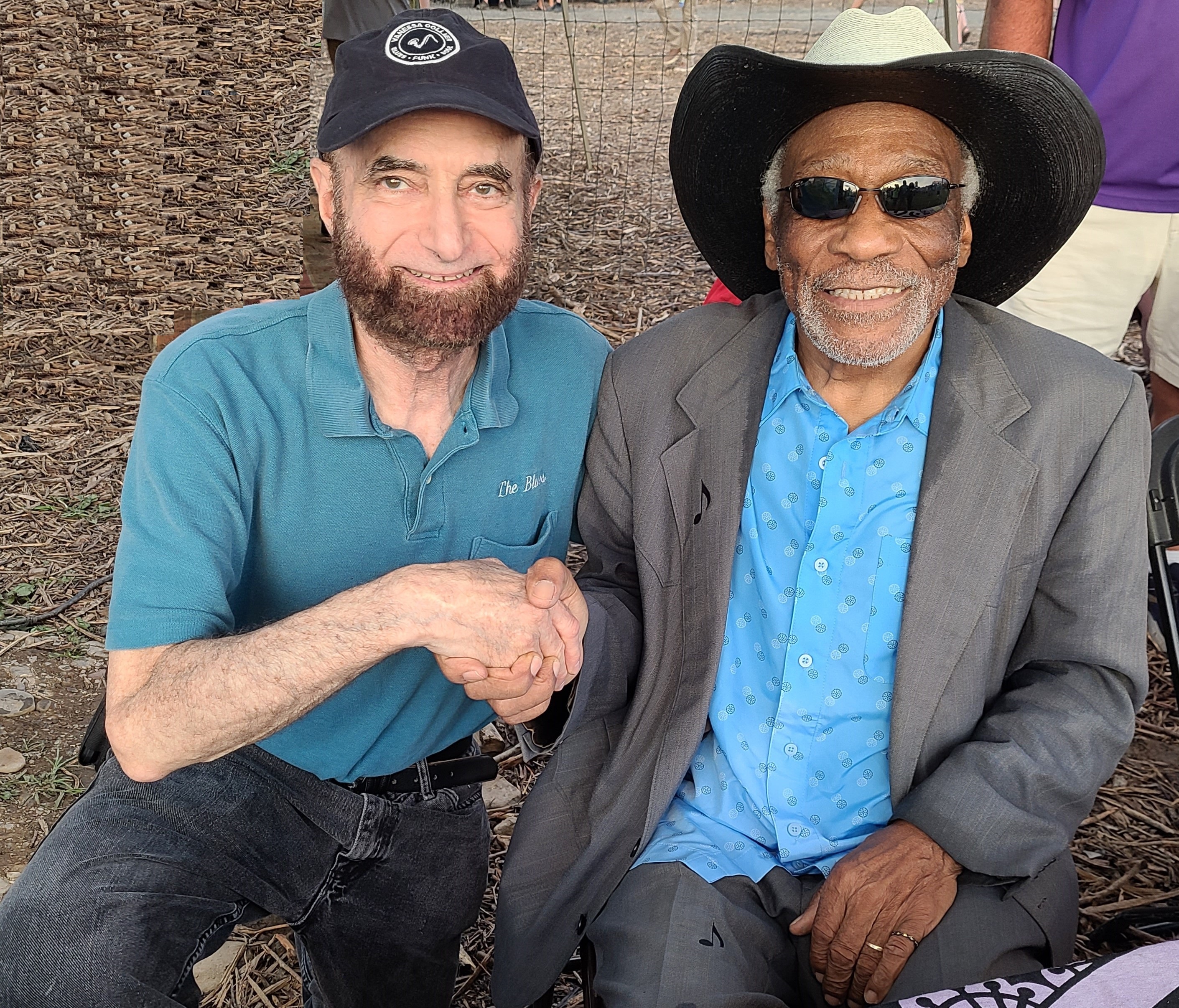 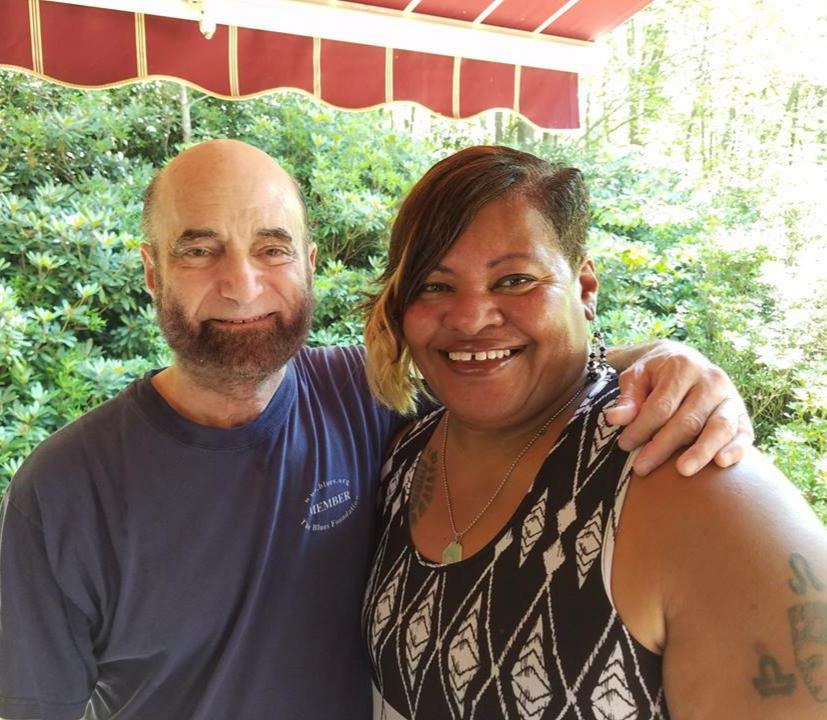 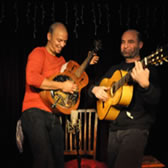 Jonny jammin' with Samuel James, at
The Psalm Salon in Overbrook 2010 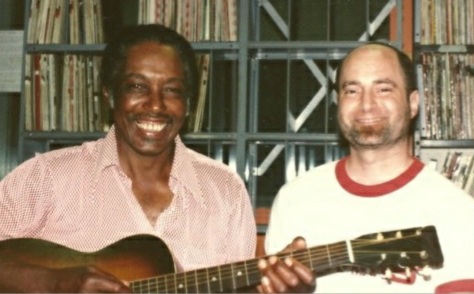 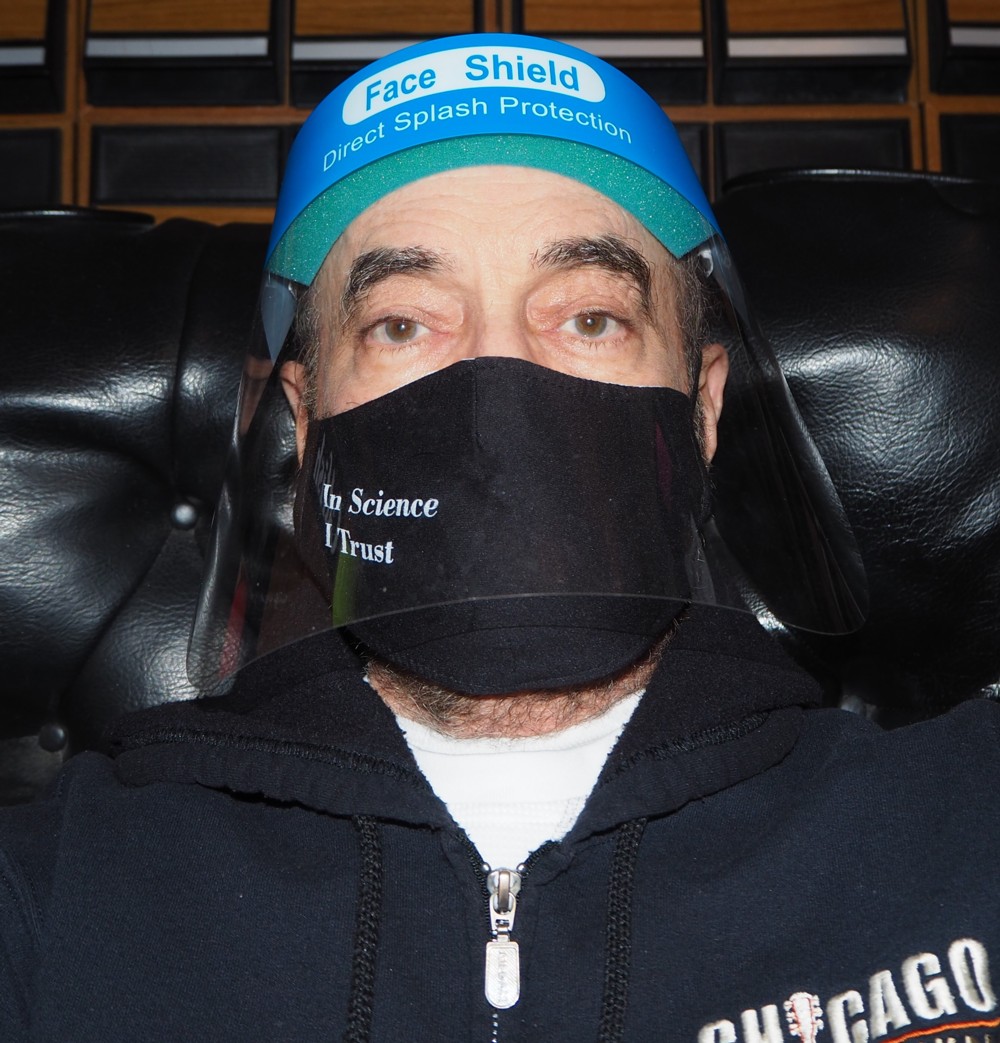 Ready for anything and everything!

The Twisted Tail
509 South 2nd Street
Philadelphia PA 19147
215-558-2471 email: This email address is being protected from spambots. You need JavaScript enabled to view it.


From the summer of 2012 through the summer of 2013, with support from The Pew Center for Arts & Heritage, through the Philadelphia Music Project, we presented The Mississippi Blues Project, a series of concerts by Mississippi blues artists that are now available online, with shows from The Cedric Burnside Project, Big George Brock, Terry "Harmonica" Bean, Jimmy "Duck" Holmes, Robert Belfour, Big A (Anthony Sherrod) with Robert "Bilbo" Walker, Super Chikan, The Homemade Jamz Blues Band, Rory Block, and James Cotton. Check 'em out!