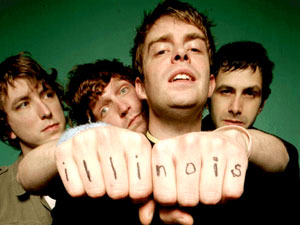 This Friday, Philly's own Illinois is coming to tear up the XPN/NPR Music Free at Noon stage. Since their debut in 2006, Philly's own Illinois has become reknown for pulling out a blend of genres to fit their Southern-tinged blues rock. Whether they're throwing out some foot-tapping blues or some melancholic, electronic harmonies, Illinois really vibe with crowds - giving and receiving the best from their audiences.

This five-piece is comprised of front man Chris Archibald (vocals, guitar, keyboards, banjo), Martin Hoeger (bass), John-Paul Kuyper (drums), Daniel Pawlovich (keyboards, guitar, backing vocals), and Chris Shepherd (guitar, vocals). The band's chemistry is air-tight, probably because all five have been solid friends since childhood. Garnering comparisons to influences as varied as Wilco, the White Stripes, and Arcade Fire, Illinois has opened for The Kooks and the Train Wreck Riders, and have quite a following, especially after their electric performance at the 2009 SXSW Festival.

With plenty of miles, gigs, and ideas under their belt, Illinois decided to put their hundreds of unreleased songs to good use. According to Archibald, "Collectively we came up with this idea to keep it in people's face. Month after month after month we'll just keep releasing something new." So Illinois undertook a labor-intensive task that most bands would shy away from: they decided to release a new EP for six straight months. Naming the series The Adventures of Kid Catastrophe, the band began to issue the EPs in November 2008. The resulting collection has a kind of mix-tape vibe to it, yet all of the songs and styles fit seamlessly together. Songs range from the electro-beats of the first release to the sad guitar strains of the third release to the energetic, old-timey rock of the final release. The band packaged all six together in a deluxe edition album released in May.

Check them out at World Cafe Live on Friday July 10 and the XPoNential Music Festival on Saturday, July 25