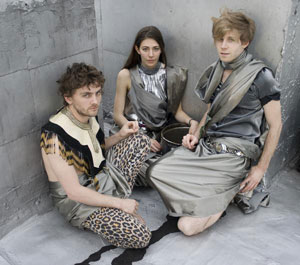 This week, Free at Noon brings a retro vibe to Philadelphia, as the electronic indie trio Chairlift comes to town. Hailing from Colorado, Caroline Polachek, Aaron Pfenning, and Patrick Wimberly formed the band in 2005 with the intention of creating music for haunted houses. Chairlift earned early success by performing around the University of Colorado, bringing a semi-serious brand of New Wave-style dance punk to local audiences. Their act caught on, and the band recorded the EP Daylight Savings in 2007.

Realizing their potential, Chairlift changed plans and moved to Brooklyn, performing with other indie up-and-comers like MGMT and Yeasayer. The group signed with Kanine Records in 2007, releasing their album Does You Inspire You? a year later. Chairlift found widespread acclaim that same year when its song "Bruises" was featured in one of Apple's tastemaking iPod commercials. The ad brought instant attention. They were mentioned by everyone from the New York Times to Perez Hilton.

Does You Inspire You? features hauntingly danceable melodies coupled with Polachek's airy vocals. Tracks like "Earwig Town" demonstrate the band's ability to switch genres, while the aforementioned "Bruises" displays the band's playful side. Chairlift pays homage to its predecessors without sound tired, pulling off a retro feel with a uniqueness and sincerity that makes this a hard group to resist.

Bring your dancing shoes and legwarmers. This Friday's Free at Noon promises to be an old-school party.