Listen
You are here: World Cafe //   the bacon brothers

Made possible by XPN Members, and Comcast.
SOLD OUT | Listen to the Show Live on Friday

PLEASE NOTE: This is the weekend of The Penn Relay Carnival (April 23-25, 2009), so please do not drive to the April 24 Free At Noon. We ask that you take public transportation to get to WXPN/World Cafe Live that day, as there is NO PARKING available in University City during the annual Penn Relays. 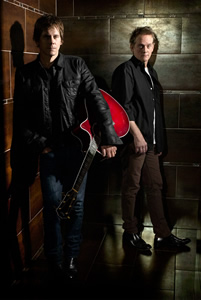 Long before Kevin Bacon became a pop-screen phenomenon, and before his older brother Michael Bacon became a sought after film/TV composer, this Philadelphia-based duo of brotherly love had been collaborating under the moniker The Bacon Brothers. After Michael Bacon established his music career with Columbia Records in the '60s and released several solo albums on CBS Records in the '70s, he turned to collaborating with Kevin. Despite writing music together since childhood, the duo didn't become official until 1995.

Now 14 years and plenty of exposure later, the two are still playing around their Philadelphia base. Their brotherly chemistry is evident when it comes to creating rootsy rock 'n' roll tunes, and their strong style incorporates elements of alt-country, folk, blues, and Americana. The two are onto their sixth full-length album, New Year's Day. Receiving a great deal of praise, the release is one of the duo's most accessible to date. Though New Year's Day is filled with the brothers' trademark sound, they experiment with jazzy blues and reggae. Ukeleles, keyboards, and a background choruses round out this collection of catchy songs.

Currently, the duo has performances scattered across the country for the summer, and will be back in the PA/NJ/MD area in the fall. For complete tour dates check out myspace.com/thebaconbrothers.

This show is SOLD OUT