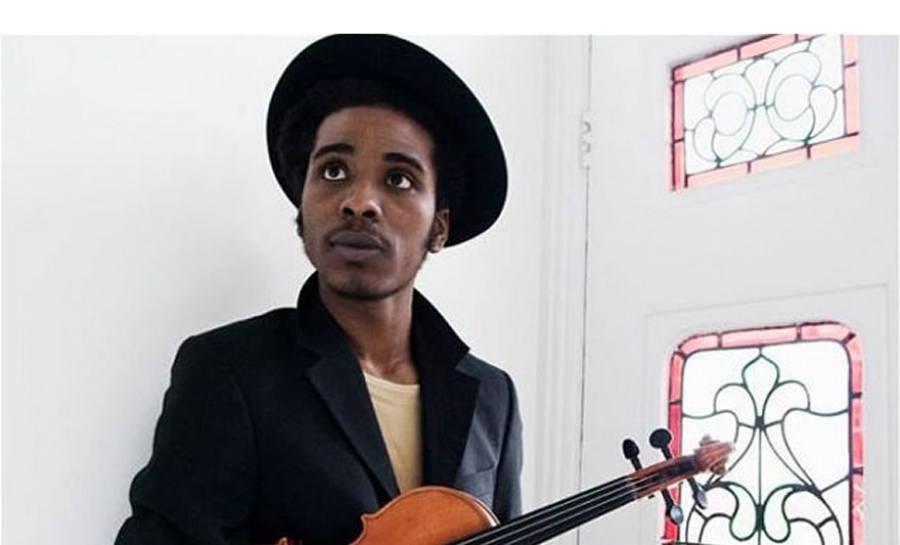 He's the singing violinist that's taking over the streets and the web.

Marques Toliver is the afro'd classically trained singer-songwriter who always has his violin under his chin, and effortlessly blends R&B, gospel, and his Suzuki-method talent for a truly unique sound. Raised in Daytona Beach, Toliver has been formally educated in music since age 11, including studying music at university. He made his way to New York a few years ago, and began the hard life of busking--he sang on subway platforms, on street corners, in Central Park, and all throughout Brooklyn. He was discovered by TV on the Radio's Kyp Malone, and soon he was recording with Holly Miranda, Scott Matthew, and Grizzly Bear. Toliver then journeyed to London, where he was re-discovered by Jools Holland and his career really began to take off. The trend-chooser picked Tolliver to appear on his famous music show at the behest of Adele, the current chart queen of soul and pop. Toliver has just released his debut EP, "Butterflies Are Not Free" to wonderful critical reception, and his recent scintillating SXSW performances also indicate that this driven young artist is getting the recognition he deserves.

"Butterflies Are Not Free" has just four songs, but they're bursting with the passionate song-writing that characterizes Marques Toliver's music. From the rolling thunder under "Sitting Up In My Room" to the enthusiastic orchestral pop and R&B fusion in "Charter Magic", it's clear that Toliver is dreaming big. Toliver's impressive vocals are also put to good use on the release, his rich tones full of emotion and soaring above his string arrangements. It seems that this talented and driven musician is coming into his own, and he's got a great road ahead of him.

Toliver currently has a number of shows in North America, throughout October. Stops include Denver, Seattle, Vancouver, Nashville, and Durham.

Tagged under
More in this category: « Anna Calvi Courtney Barnett »
back to top
Site Map | Help & FAQs | Privacy | Contact | Playlist | Public Inspection File | Public File Help
Copyright 2022 WXPN-FM / The Trustees of The University of Pennsylvania, All Rights Reserved
XPN.org is made possible with the generous support of XPN Members and our Business Sponsors.