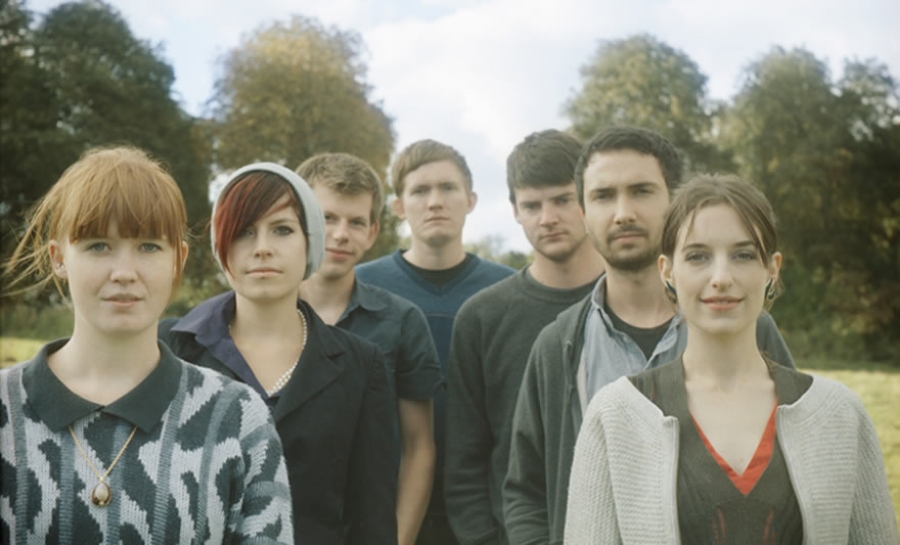 Los Campesinos! is a relatively young outfit, coming together as a three-piece at Cardiff University in 2006. Now seven strong and with four well-received full-lengths, Los Campesinos! have crafted a reputation for lively indie pop.

Given a moniker that roughly translates to "The Farmers" or "The Peasants", this spunky septet does have its share of folksy and also indie rock influences, from Modest Mouse to Broken Social Scene to Belle & Sebastian. The generous joy evinced in the Los Campesinos! sound first brought the group a twee-pop label, but in the past several years, Los Campesinos! has developed a reputation for dark humor, danceable beats, and multi-layered instrumentals. Now on their fourth release, Los Campesinos are obviously evolving in sound.

The ten tracks on "Hello Sadness", released just last November, create a certifiably signature Los Campesinos! sound--plenty of glockenspiel, love, and football. But there's something more direct about this latest release. The sharp lyrics create deeply personal narratives, often about the sadness of relationship endings. But the twisted humor and fresh beats from the Los Campesinos! repertoire make this release more exuberant than anything else.

Hear them play live in this session of World Cafe with David Dye.

Set List:
BY YOUR HAND
HELLO SADNESS
SONGS ABOUT YOUR GIRLFRIEND
BABY I GOT THE DEATH RATTLE