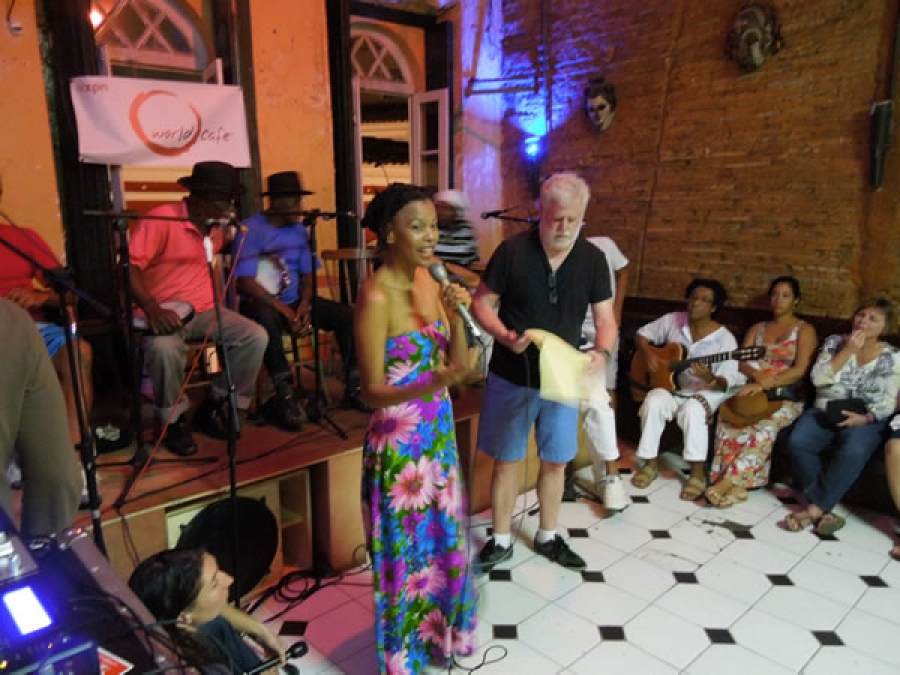 July 16, 2013 - The first stop on our World Cafe Sense of Place trip to Brazil was in Pelourinho, the old part of city of Salvador on the country’s northeast coast. Hoping to get a sense of the roots of the samba, the backbone of Brazilian music, we captured a performance there from one of the most thrilling groups ever on the Cafe.

The two oldest styles of samba, samba chula and samba de roda, started with the original African slaves who were brought to Salvador in the Brazilian state of Bahia. One of the strongholds of samba is the village of Sáo Braz where septuagenarian brothers Joao de Boi (“John The Ox” - he raises cattle) and Aluminio (named for his shining sweaty face when he played soccer as a kid) sing in stirring duet in Samba Chula de Sáo Braz. For our special performance they are joined by Raimundo Sodre on vocals and guitar who is also very instrumental in keeping the original samba sound alive.

We also talk samba with Randy Roberts known as “Sparrow.” He is a Pelourinho resident and keeper of Cana Brava a record store which is dedicated to preserving Bahian musical culture.

More in this category: « Nancy And Beth On World Cafe Hear The Nominees For This Year's Americana Awards On World Cafe »
back to top
Site Map | Help & FAQs | Privacy | Contact | Playlist | Public Inspection File | Public File Help
Copyright 2021 WXPN-FM / The Trustees of The University of Pennsylvania, All Rights Reserved
XPN.org is made possible with the generous support of XPN Members and our Business Sponsors.