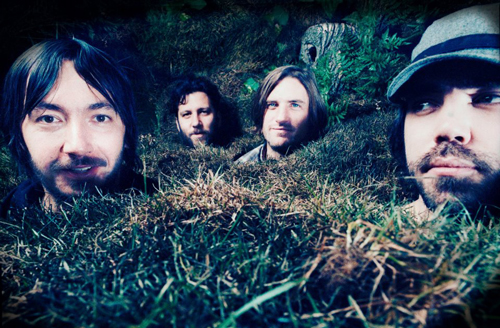 Montreal based, Patrick Watson is a Montreal makes music the way some directors make film - wide angled and with lots of emotion. His last album 2009’s Wooden Arm was nominated for the Canadian Polaris Music Prize, a prestigious music award annually given to the best full-length Canadian album based on artistic merit, regardless of genre, sales, or record label.
His 4th studio album, The Adventures In Your Own Backyard, was released in May and is equally cinematic.

The band played SXSW as well as a slew of other festivals this year and are currently touring Europe, including two shows in London and stops in Brussels, Paris, Lyon and more.

In this interview and performance - recorded live in the World Cafe performance studio in Philadelphia, the band performs "Blackwind," "The Quiet Crowd," "Words In The Fire," and the title track from their new CD, "Adventures in your Own Backyard."

More in this category: « Divine Fits Debo Band »
back to top
Site Map | Help & FAQs | Privacy | Contact | Playlist | Public Inspection File | Public File Help
Copyright 2022 WXPN-FM / The Trustees of The University of Pennsylvania, All Rights Reserved
XPN.org is made possible with the generous support of XPN Members and our Business Sponsors.