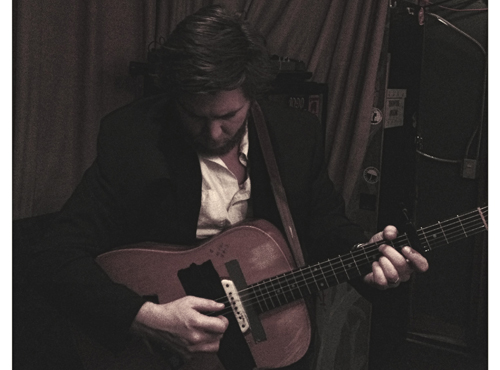 Field Report, the brainchild of Chris Porterfield, came together quickly last year against the odds.
Porterfield assumed his music career was over after leaving DeYarmond Edison in 2006, when he began working in Marquette University's Office of Student Affairs in Milwaukee for the next five years. But Porterfield crafted songs in the meantime that recall Paul Simon and Nebraska-era Springsteen, and these tunes comprise the band's self-titled debut released last month.

Porterfield's poignant lyrics take on dark Americana and justify the band's 2012 tours with Emmylou Harris and Aimee Mann this year. Hear songs from the group's expansive debut in this installment of World Cafe: Next.

ADDITIONAL INFORMATION Field Report is a six-piece band led by Wisconsin native Chris Porterfield. Formed my Porterfield sometime around 2010 (and also an anagram of Porterfield's last name) Field Report was created to flesh out his songs that were mostly written on guitar. Porterfield had previously been in a band with Bon Iver's Justin Vernon, and Field Report recorded its self-titled debut LP at Vernon's studio in 2011. Released on September 11, 2012, the album evokes several classic singer-songwriters, from Bob Dylan to Neil Young to Leonard Cohen, while also adding a distinct indie rock element to the music.

IN THIS INTERVIEW The name of the band is an anagram of Chris Porterfield's last name. Figuring out a band name is the toughest part of being in a band. Travis, the bassist, sent an anagram generator to them via e-mail and Field Report came out. It fit the "documentary nature" of the songs. The songs are up to 3 years old and they are the first batch Chris wrote that go together. After DeYarmond Edison was over, Chris thought he was done with music. He got married and lived a normal "white picket fence" life and the songs started happening. There was a desire to keep working on the music and they're following the energy that it produces. Midwest influences show up throughout the album and it was both accidental and purposeful. The references are both flattering and unflattering. The album was recorded in Justin Vernon's recording space. Chris understands the use of Bon Iver as a reference point to the band but he wants the record to give them something else to relate the band to. He doesn't know how to react to the positive reaction to the new record.
Tagged under

More in this category: « Debo Band Beth Orton »
back to top
Site Map | Help & FAQs | Privacy | Contact | Playlist | Public Inspection File | Public File Help
Copyright 2022 WXPN-FM / The Trustees of The University of Pennsylvania, All Rights Reserved
XPN.org is made possible with the generous support of XPN Members and our Business Sponsors.