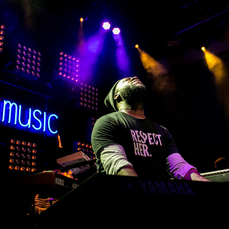 Robert Glasper's music is a study in convergences. A pianist, bandleader and composer with a strong foothold in modern jazz, he belongs no less to the terrain of contemporary gospel, alternative hip-hop — and R&B, the category under which he won his first two Grammy awards (of three). Glasper has carved a signature out of this cross-genre dialogue; consult his recent explainer for Jazz Night in America, about the jazz roots of some famous hip-hop samples.
At NPR Music's 10th Anniversary Concert at the 9:30 Club in Washington, D.C., Glasper came to play, bringing longtime associate Derrick Hodge on electric bass and a newer collaborator, Justin Tyson, on drums. The performance began with something like an invocation, as Hodge played a chiming and meditative elaboration on "Portrait of Tracy," a ballad by Jaco Pastorius.
What came next was an unbilled guest: Bilal, the shape-shifting R&B vocalist who has known Glasper since the first day of freshman year at the New School for Jazz & Contemporary Music in New York. They dug into "All Matter," a tune that first appeared on Glasper's 2009 album Double Booked, later resurfacing on Bilal's 2010 release Airtight Revenge. The lyrics establish a philosophical reflection well suited to our times:
We're all the same
And all so very different
Divine by design
It all intertwines
Glasper and Bilal have performed "All Matter" countless times, always managing to find some new motivation in the song. This performance features a keyboard solo that starts out terse and gradually opens up and expands, hinting at some tricky rhythmic displacement that Tyson later ratifies, in his spectacular drum solo.
Glasper's solemn but uplifting piano interlude leads into another Bilal original, "Levels," a portrait of relationship strife that refuses to lay the blame fully on either side. It's an argument for rendering complexity with clarity — something Glasper and crew know a thing or two about.