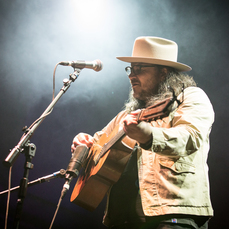 Despite having visited the Tiny Desk three times, and traveling to the tunnels beneath Fort Adams State Park, Jeff Tweedy has brought only a fraction of his many musical permutations to NPR Music during our first 10 years.
Thankfully for us and the audience at our 10th anniversary concert on Dec. 2 at the 9:30 Club, Tweedy's set managed to run the gamut of that celebrated career. From his beginnings as a slack, alt-country rocker (playing Uncle Tupelo's "We've Been Had") and A.M.-era Wilco (with "Passenger Side") to his recent turn as Mavis Staples' producer and songwriter (on "Jesus Wept") and later, Nels Cline-era Wilco ("Locator").
The constant in all this experimenting is Tweedy's voice as a singer and songwriter — one that invites a deep trust, even when it courts darkness. Performing solo with an acoustic guitar, his voice was once again at the center of it all.
Naturally, Tweedy surprised, opening with an unreleased song that looks forward and back — a theme of the evening. "I leave behind a trail of songs / from the darkest gloom to the brightest sun," he sang. "I've lost my way, but it's hard to say / what I've been through should matter to you." It may hard to say why, but it's clear that it does.