Watch Tank And The Bangas Celebrate 10 Years Of NPR Music 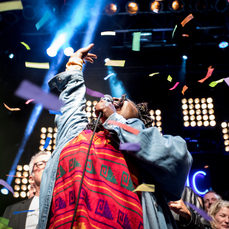 Tank and the Bangas' live show never fails to make an impression.
The first time the NPR Music team encountered the band, it was early 2017 and our staff was sifting through entries to our Tiny Desk Contest. It's easy to disappear into a crowd of more than 6,000, but the band's entry immediately distinguished itself through its palpable joy and arresting charisma and was, not long after, named the winner of our contest.
As the closing act of our party at the 9:30 Club in Washington, D.C. — and so coming full circle in a breakout year — Tank and the Bangas made no less of an impression on the crowd. Tank and the Bangas presented a whirligig of styles and sounds, drawn together by strong friendships and led by Tarriona "Tank" Ball's commanding performance. She asks nothing less than the full engagement of an audience — and she always gets it.
Even at the end of our seven-act anniversary concert, the 9:30 Club audience met Tank and the Bangas on its level. The band played four songs — including "Quick," the song that won it the Tiny Desk Contest — and Tank brought the staff of NPR Music onstage for a toast and, of course, a dance party.
NPR Music is many things, but sharing the joy of musical discovery has been and always will remain our central goal. Tank and the Bangas' sound is unified by a similar aim. The joy we felt watching their video for the first time is the same spirit they find in playing every song.