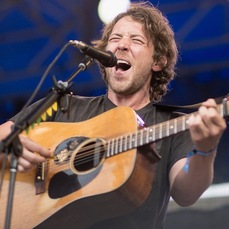 When Fleet Foxes took the stage to close out the first day at Newport, it had been eight years since the band's last performance at the festival. In 2009, the band was picking up steam after releasing its critically venerated self-titled debut, "White Winter Hymnal" was still fresh as new snow in our collective consciousness and then-drummer J. Tillman wouldn't become Father John Misty for another three years.
Since then, Fleet Foxes have released a well-regarded second album, Helplessness Blues; gone on hiatus; returned from hiatus; and, this spring, put out the sprawling Crack-Up. Principal songwriter Robin Pecknold, who spent the band's time off backpacking and studying at Columbia University, has said the new album's title is a reference to an F. Scott Fitzgerald essay about his existential crisis — a natural if slightly delayed follow-up to a record whose title track dealt with twentysomething anxiety and aimlessness.
During Fleet Foxes' Newport set, tracks from Crack-Up (many of which move through multiple chapters as they shift in tempo and meter) interwove elegantly with earlier songs, with the band's distinctive harmonies making for a compelling through-line.