Listening to Danielia Cotton, you're bound to believe: Black is rock and roll.

As the daughter of a jazz singer, Danielia grew up in a small New Jersey town.

She moved to New York a few years ago and has been playing at clubs throughout Manhattan ever since. Danielia has built a powerhouse alt/rock-blues sound that draws from influences like The Rolling Stones, PJ Harvey and Led Zeppelin. As 2 Walls Webzine has raved of her live New York sets: "That bluesy voice, her soulful guitar work and her cover girl face make her a triple threat."

In the summer of 2004, she completed an EP with singer/songwriter/producer Kevin Salem. Her first full length album, entitled Small White Town, will be released in early spring 2005.

What do you like best about collaborating with songwriters and musicians like Kevin Salem and Marc Copely?
Kevin hears the music on many levels. For example, we can be working on a song and he'll see the song all at once as angry, sweet, soulful and pop/catchy. In the end Kevin always goes for the A+ effort. Some people would be content with the A- or the B+ but not Kevin. Kevin is a very gifted musician and producer. What I love most is his heart; you can hear it in all his music. Marc Copely is a very talented musician. We haven't yet collaborated on any original songs but I look forward to doing so in the future. 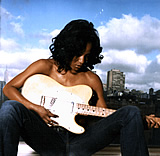 How does living in New York City define who you are as a singer and performer?
Let's put it this way, I'm currently working on a song about coming unhinged. In New York being unhinged is business as usual. You see almost everything on the streets of New York. On almost every corner there's bound to be somebody sadder, happier, more beautiful, smarter or crazier than you've ever been. Living in the midst of all that feeds into your creativity.

at Amazon, and find music like Danielia Cotton, and other XPN Artists. Your purchase that starts here supports WXPN public radio.

What's your favorite movie of all time, and why?
I love Pretty Woman. Where else can a hooker and a multi-millionaire live happily ever after?

OK... how about your favorite song, and why?
Unfair question, I'll give you one out of a hundred possible choices. "Blackbird" by John Lennon and Paul McCartney.

You seem comfortable performing with an acoustic guitar or with a full band, but which do you prefer?
It depends on my mood, but mostly a full band. I love to rock out and also be intimate with an audience; with a band you can do both.

I know your mom is a professional singer, so what kind of advice has she given you?
Sing the music that you love, in your way.

Any New Year's resolutions for 2005?
1. Practice more guitar and piano. 2. Write a song that someone somewhere will be singing 30 years from now.

If you could pick any living musician to collaborate on a song with, who would you choose and why?
Prince. He's rock, he's soul - he excels in so many genres.

OK... if we came to NYC to visit on a Saturday, where would you take us? What would we do, where would we have lunch, etc.?
First we'd go to the awesome flea market on 26th and 6th. Then pick up some sandwiches from a corner deli and eat lunch in Central Park. We continue onto to Soho, where we'd resist the temptation to shop. And finally, check out some new music at one of a dozen great clubs on the Lower East Side. Hey, if you're still up and hungry at midnight, we can catch a late bite at Blue Ribbon on Sullivan Street.