Seattle-based singer-songwriter Laura Veirs calls her 2005 Nonesuch release Year of Meteors "a road record." "It doesn't sound like one," she says, "but it is."

Veirs had spent most of 2004 touring in support of the hauntingly beautiful Carbon Glacier, her breakthrough effort and Nonesuch debut. She started out in Europe, where she was greeted with overwhelming critical praise and sold-out houses. Then Veirs worked her way around the States, where she was still just being discovered (though the reviews were also often superlative). The experience was at times heady, other times grueling, and she incorporated it into her new songs. However, given Veirs' vividly descriptive yet dream-like lyrics, you won't learn anything about her actual itinerary. Year of Meteors is no ordinary travelogue, but it will definitely take you on a remarkable journey.

"All the songs are about transportation, motion," Veirs explains. "If you listen to the words, there's always some movement happening, whether it's greyhounds running down a mountainside as mud flows or a person flying off into the sun or someone lurking around the bottom of the sea. I think that's because I was in motion so much of the year. Somehow I knew that all the traveling would come into the songs, but I wanted to remain focused on the bigger things, not just life on the road, so that's why there are no direct references to that."

There are, she hastens to add, "love songs related to that experience, like the struggles of being away from home and your partner. Or having my band and the different relationships I have formulated, many of them very close because of the intense circumstances of touring. So it's a relationship record too."

And, finally, it's a band record: a fertile collaboration between Veirs and her studio band, the Tortured Souls (who often play live with her) - Steve Moore (piano, organs), Karl Blau (bass, guitar, vocals), and producer Tucker Martine (drums, percussion, treatments). Viola player Eyvind Kang, another longtime associate, also sat in. As Veirs explains, "When we talked about making the album, we decided to record a lot of these songs as a band first, then do some more of the solo type of songs. It had always been the opposite before, I would go in and record the more quiet guitar parts and sing. This time, half of the record or more are tracks that we did live as a band first. Then we went in and recorded the quieter ones. We approached this from the beginning more as a band album and it really turned out that way."

Congratulations on your new album. What was on your mind creatively when you started to record and write for this new album? Did you want to stake out any particular musical position? Attempt anything new? Or not?
I like making my records different from one to the next. It feels fresh and exciting to change it up and to surprise people. So yes, I was thinking: I want to play more electric guitar, more uptempo songs that are fun to play live, I want drums and beats all over this new recording. Also, I was thinking about air a lot, and space, and birds, and travel, and so those elements crept in as well.

You and Tucker Martine have worked together for a while. How did you meet him? What does he bring to the creative process for you?
Yes, this is our fourth recording together. I met him through another Seattle songwriter, Aiko Shimada, in 2000. He's wonderful to work with. He brings this to the recording process: intense focus, a great sense of humor, the ability to have fun over long, long hours, and a perfectionism that doesn't interfere with the raw feeling of a good take. He also hears things that I wouldn't generally: programmed beats with unusual meters, strange textures that i wouldn't have thought of but that make the songs spring to life. I try to come with the foundation of a good song; he helps them shimmer.

What kinds of music did you listen to when you were growing up?
My parents had all kinds of music on around the house, but mostly classical music. And, of course, I listened to pop music on the radio. My dad enjoyed messing around with piano and guitar and had a fun, casual relationship with music that was good to be around.

I read once somewhere that you were in a punk band? How did that occur? Was it the energy of punk that you were drawn to?
Yes, I was in a punk band in college. I was - and still am - inspired by the DIY ethic of punk: you have what it takes to make your life happen. And if a big part of your life is music - you can write songs, record them, do the artwork, and find a way to do shows with people. When I was starting out, it was great for me to discover the riot grrl movement and people like Ani DiFranco. And yes, the energy of punk is still absolutely compelling to me. We have one punk song that we play live - a punk version of the song "Magnetized" on the album, and it is so, so, so fun to play. Playing with feedback is like charming snakes, like manouvering vipers or something. Exciting stuff. 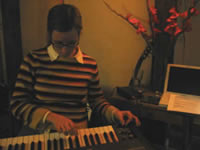 You moved to Seattle in the late 90's. What was it like establishing your career as a musician there?
It took quite a while, for a variety of reasons. 1 - I wasn't very good. I was writing interesting songs, but I couldn't sing very well. I'm very appreciative of the people who supported me in the beginning and gave me the sense that I was doing something worthwhile even though it was really raw. 2 - I was playing acoustic guitar and getting interested in old-time folk music in a town that was still coming out of being the grunge capital of the world. "Folk" had a bad name back then. I'm glad people are starting to use it again, and understanding that it's not all woo-woo and soft. 3 - It takes time to find your people when you move to a new place. I think it took about four years for me to find the peeps that I really enjoyed playing with, and those peeps - among others - are the ones that are in my band now: Karl Blau, Steve Moore and Tucker Martine.

What song do you wished you'd have written?
"Famous Blue Raincoat" by Leonard Cohen or "River Man" by Nick Drake.

You spent some time in China. When was that and what were the circumstances for your going there?
I spent a month there when I was 18, visiting my cousins who were studying Buddhism there. Then I went back when I was 21 for six months of studying Mandarin, and then again when I was 23 for three months to do my senior thesis in geology in the remote Takalamakan desert.

Name a few of your musical guilty pleasures.
Listening to my partner Pete imitate Morrissey. It's not a guilty pleasure, just a real pleasure every time he does it.

Okay, Seattle. The Seahawks, The Sonics or neither?
THE STORM!