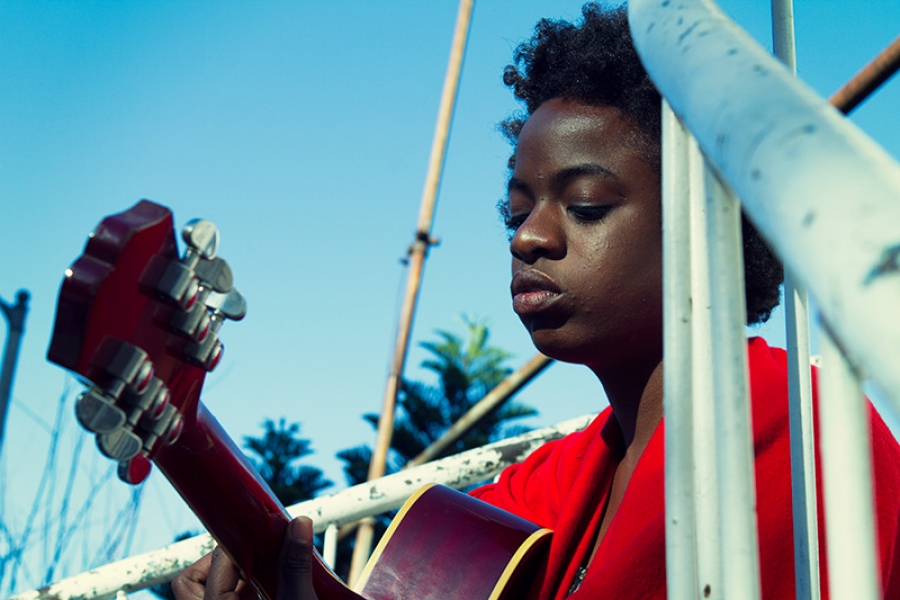 Photo by Florencia P
Now based in LA, Sunny (née Sydney Lyndella Ward) was born to a single mom in Nashville.
She had a nomadic childhood, moving around from Michigan, Colorado, and living on the streets of San Francisco. Now in her mid-20s, War settled down in Los Angeles as a teenager, and became known for her street playing in Venice Beach. War is a fantastic guitar player. She learned her plucking style by playing "Blackbird" by The Beatles, and by falling in love with the blues. "I feel like I am a blues guitarist, but I don't think I'm a blues artist," she says. "I only use the scales and techniques that I know, and the only time I was trained in music was on blues guitar. I really love Elizabeth Cotten and Mississippi John Hurt," says War.

Citing influences as diverse as Robert Johnson, Elmore James, Tracy Chapman, Joan Armatrading and Black Flag, the songs on her album, With The Sun, evoke a wondrous, breathless beauty and are filled with hypnotic, acoustic calm. Her songs are exemplified by her tender voice, her unique style of guitar playing and her ability to touch the listener's heart with her lyrics. On her 2015 full length, Worthless, War aimed squarely in the blues-folk genre. On the new release, she maintains elements of blues and folk, but has matured into a more traditional singer-songwriter style.

Here’s a couple videos from her World Cafe session – we’ll get to see her in May, as she’s booked for Non-COMM.

More in this category: « Superorganism - February 2018 Courtney Marie Andrews - April 2018 »
back to top
Site Map | Help & FAQs | Privacy | Contact | Playlist | Public Inspection File | Public File Help
Copyright 2021 WXPN-FM / The Trustees of The University of Pennsylvania, All Rights Reserved
XPN.org is made possible with the generous support of XPN Members and our Business Sponsors.