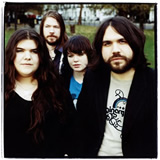 The sound of The Magic Numbers revolves around the brilliant songwriting and guitar playing talents of singer Romeo. Born and raised in Trinidad (where his mother had her own opera show on TV)

the family moved to New York when he was teenager and later moved again to Ealing in London.
Related Links
Visit our CD store

There he met drummer Sean and started making music. Consequently, these days the two are to be found sitting in the soundproofed front room of the family's terraced house, without natural light or air, surrounded by instruments, prolifically penning as yet unheard classics.

Drawing inspiration from many sources, singer-songwriters (Cohen, Dylan), 60's harmony groups (Mamas & Papas, Lovin Spoonful), epic rock or such mavericks as David Axelrod. The band craft a sound which like Flaming Lips or Beck, is coming from everywhere but is uniquely theirs.