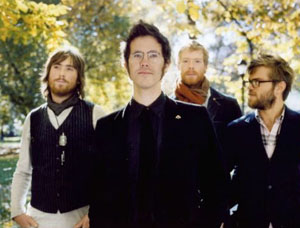 Elvis Perkins is a soulful singer-songwriter who crafts brooding, thoughtful melodies with a sophisticated pop sensibility. His catchy and timeless songs have garnered comparisons to Leonard Cohen and Bob Dylan. Raised in Los Angeles and New York, he started playing classical guitar and rock, but he later found his niche in folk. Perkins expanded his repertoire of instruments, incorporating a mix of piano, harmonica and auto-harp and adding several unique timbres to his sound.

Having lost both his parents to tragedy, Perkins's reflective music often borders on heartbreaking, yet remains hopeful and quietly charming. Aided by a trio of friends, Perkins coped with such tragedies on his debut album Ash Wednesday, which was hailed for expertly juxtaposing melancholy and optimistic merriment. Joined by the same trio, Elvis Perkins in Dearland continues to bare all emotions on their eponymous album, with a resemblance to Ash Wednesday. Full of spirit and wisdom, Perkins invites us to reflect on those lost in life and war through delicately strummed guitars, sensitive vocals and ocasionally the frivolity of bombastic New Orleans-inspired brass.

Join XPN in welcoming this Elvis Perkins and his jazzy, emotive band for Friday, June 19th's Free at Noon.

More in this category: « FAN Archive 062609 FAN Archive 061209 »
back to top
Site Map | Help & FAQs | Privacy | Contact | Playlist | Public Inspection File | Public File Help
Copyright 2021 WXPN-FM / The Trustees of The University of Pennsylvania, All Rights Reserved
XPN.org is made possible with the generous support of XPN Members and our Business Sponsors.