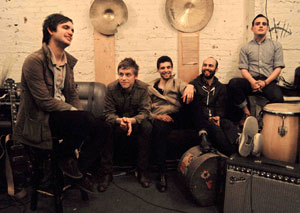 After hitting the music scene in 2007 with the release of their standout debut album Fort Nightly, White Rabbits developed a reputation as an energetic six-piece. Touring with a series of breakout indie acts such as The Walkmen and Spoon, White Rabbits captivated audiences around the country with their lively performances and unique lineup (two drummers!), appearing on the World Cafe the same year. NME named them one of the top three performing bands after their winning showcase at SXSW the same year.

Intense rhythms and sweeping, melodic choruses typify their catchy and, at times, sinister sound - a blend of reggae and ska the members describe as "honky-tonk calypso." They seamlessly intertwine tinkling piano riffs and heavy handed guitars, transforming once straight ahead pop hooks into something much more adventurous. Two years since the release of Fort Nightly, White Rabbits continue to dance to their own drummer(s). With the same unflagging momentum they prepare to release their greatly anticipated sophomore album, It's Frightening, produced by former tourmate Britt Daniel, of Spoon.

White Rabbits are playing NYC's Bowery Ballroom on May 21 and will return to Philly to play Johnny Brenda's on Friday, June 5.

More in this category: « FAN Archive 052209 FAN Archive 050809 »
back to top
Site Map | Help & FAQs | Privacy | Contact | Playlist | Public Inspection File | Public File Help
Copyright 2021 WXPN-FM / The Trustees of The University of Pennsylvania, All Rights Reserved
XPN.org is made possible with the generous support of XPN Members and our Business Sponsors.