Made possible by XPN Members, and Comcast.
SOLD OUT>/b> | Listen--> 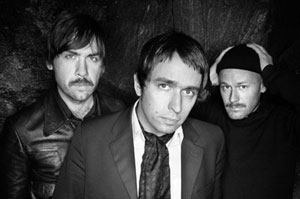 Peter Bjorn & John whistled their way into indie hearts just a couple years ago with their unavoidable, catchy single "Young Folks". The Swedish pop band got their start playing together in high school, and became official in 1999 when Peter Morén (vocals, guitar and harmonica), Björn Yttling (bass, keyboards and vocals), and John Eriksson (drums, percussion and vocals) performed their quirky new wave pop aboard a Stockholm boat. The gig was not a very successful one, but the trio were not deterred - as they said, they "just wanted to make good music for [their] own amusement". And with that aim in mind, Peter Bjorn & John have become some of the biggest names in indie pop today.

After two albums, the trio released their third studio album, Writers Block, in 2006. Filled with plenty of whistles, bongos, maracas, and warmth, the album was an instant hit, and the omnipresent single "Young Folks" was being heard on radios across the globe. Since their launch into world fame, the three have played with the likes of Kanye West, toured extensively, and focused on more projects.

After a three-year hiatus from the public eye (apart from an instrumental, download-only release in 2008), Peter Bjorn & John are back with Living Thing. This latest release proves that they do have more than a few infectious pop ditties up their sleeves, but this time around, the songs are a bit more cynical, wonkier, and even cleverer. The trio has lately been travelling the US in support of Living Thing.

Listen to the Show Live

More in this category: « FAN Archive 050809 FAN Archive 042409 »
back to top
Site Map | Help & FAQs | Privacy | Contact | Playlist | Public Inspection File | Public File Help
Copyright 2021 WXPN-FM / The Trustees of The University of Pennsylvania, All Rights Reserved
XPN.org is made possible with the generous support of XPN Members and our Business Sponsors.