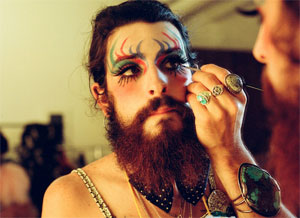 Devendra Banhart's been pegged as the leader of the indie-folk or "freak-folk" movement since his debut back in the early 2000s. While Houston native Banhart has been heavily influenced by 60s folk and psychedelia - Bert Jansch, Donovan, Nick Drake, Vashti Bunyan, and Dylan - his new album Smokey Rolls Down Canyon Mountain defies the oft-repeated "freak folk" pigeon-holing. For its recording sessions, Banhart nested in Topanga Canyon, an area rich in classic rock history. Emmylou Harris, Joni Mitchell, Fleetwood Mac, and members of The Doors all resided there in the California hippie heyday, and Neil Young laid down the tracks for After the Gold Rush in this idyllic landscape. The past has indeed rubbed off on Banhart's latest effort. The ghosts of folk rock's past urge on a move from the inscrutable and precious towards eclectic transcendence. His distinctive voice still retains echoes of voices as disparate but equally fragile as Billie Holiday and Tiny Tim, but his new music lends a laidback groove that will inevitably draw comparisons to another landmark indie folkie gone (well, occasionally) mainstream rock - Beck. Some songs dabble in tropicalia, some the gentlest of ballads, others veer towards electric bombast. But throughout Smokey Rolls Down Canyon Mountain Banhart seems poised to attract countless new fans beyond the boundaries of the "freak-folk" genre.