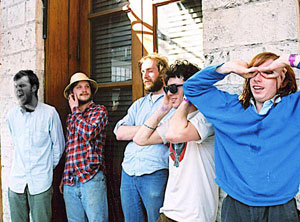 Filtering classic rock and pop hooks through a willfully lo-fi slacker aesthetic a la Pavement or Guided by Voices, Philadelphia's Dr. Dog are able to sound both timeless and immediate as only the best music can. {readmorelink}Read More...{/readmorelink}

Formed in 1999 as a recording project between two members of the more traditional indie-rock band Raccoon, Dr. Dog cemented itself into a real band when Raccoon ended in the early 2000's. Their first two records, 2001's Psychedelic Swamp and 2002's Toothbrush, were both self-released but failed to make an impact outside of the Philadelphia area. However, the band's fortunes changed when My Morning Jacket's Jim James handpicked Dr. Dog to open for My Morning Jacket for their 2004 tour. They were subsequently picked up by indie label Park the Van for their 2005's Easy Beat, which was met with wide critical praise for it's fascinating combination of psychedelic pop hooks and Beach Boys-esque vocal harmonies.

We All Belong, Dr. Dog's forthcoming new record, is shaping up to be their most powerful and cohesive artistic statement yet. With a bigger following than they have ever had before, the record is their chance to break through to the mainstream in a big way by exploring their love of "three-part harmonies, the out-of-doors, soya roti's, baking bread and diminished chords."

More in this category: « Amy Winehouse: WXPN's April 2007 Artist to Watch The Bird and The Bee: WXPN's February 2007 Artist to Watch »
back to top
Site Map | Help & FAQs | Privacy | Contact | Playlist | Public Inspection File | Public File Help
Copyright 2021 WXPN-FM / The Trustees of The University of Pennsylvania, All Rights Reserved
XPN.org is made possible with the generous support of XPN Members and our Business Sponsors.