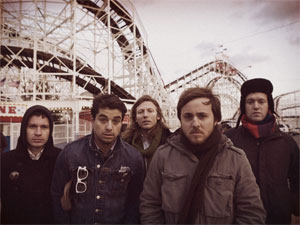 Based in San Diego, the Delta Spirit have made their musical home somewhere between indie-rock and alt-country, with a foundation built on battle-cry vocals and unconventional instrumentation, even including trash can lids.

Mixing blues, country, and roots rock with theatrical performances, Delta Spirit has made quite a name for itself. Having toured alongside Dr. Dog and Cold War Kids, they have earned themselves a dedicated underground following and drawn a chorus of praise for their fresh sound that emits joy and conviction with every note. Though they originally self-released their debut full length album, Ode To Sunshine, it has been re-released by Rounder Records.
Related Links
Listen to the Delta Spirit on the World Cafe and World Cafe: Next