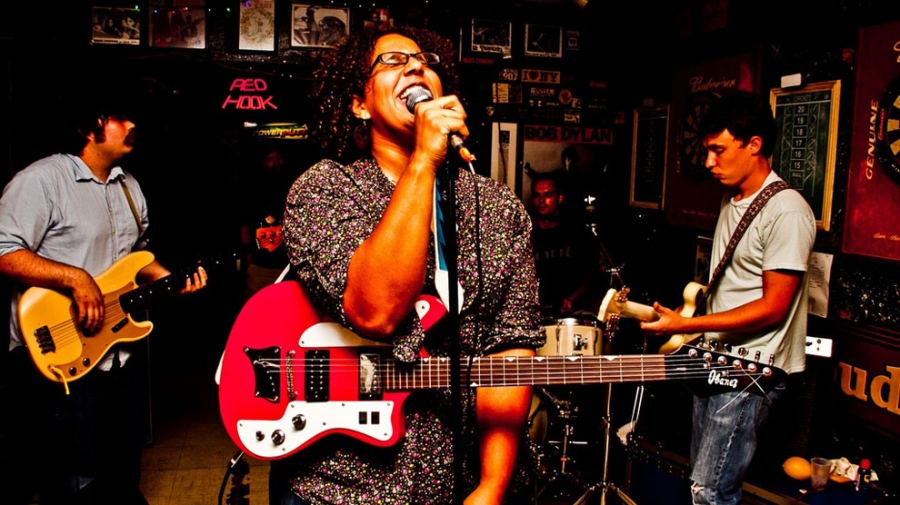 The hotly buzzed Alabama Shakes from Athens, Alabama are bringing the soul back to rock and roll. They're quickly growing buzz in other places as well


Formerly just the Shakes, Alabama Shakes are bringing the soul back to rock 'n' roll. This Athens, Alabama quartet formed out of high school and describes its shows as "just like going to a rock n' roll church." The Shakes coalesced in 2009, and is comprised of Brittany Howard, Zac Cockrell, Steve Johnson and Heath Fogg. Howard and Cockrell began playing as classmates, and met Johnson in the local music store, and after a couple low-key jam sessions, the three were asked by Fogg to open for his band at a local gig. They asked Fogg to play with them, and immediately felt a chemistry that has kept them together since. The Shakes' style is marked by Howard's powerful voice and the ensemble's irresistible energy: they enthusiastically blend rock with soul, country, blues and roots, earning critical as well as popular acclaim for their electric performances and foot-tapping self-titled debut.

The Alabama Shakes were featured on the XPN's World Cafe: Next just this past October, and we've been so taken with with their deft, gritty, and joyous soul revival that the band is XPN's Artist to Watch for November. They're quickly growing buzz in other places as well--their New York City debut "left a CMJ Music Marathon audience literally screaming for joy," according to Times critic Jon Pareles. Praise has been particularly high for lead singer Howard, with comparisons of her vocals to that Janis Joplin and Otis Redding. It's clear we're going to be hearing a lot more from this young Alabamian ensemble.

Listen to their EP on bandcamp.co

More in this category: « JC Brooks and The Uptown Sound - Artist To Watch December 2011 Laura Marling - Artist To Watch October 2011 »
back to top
Site Map | Help & FAQs | Privacy | Contact | Playlist | Public Inspection File | Public File Help
Copyright 2021 WXPN-FM / The Trustees of The University of Pennsylvania, All Rights Reserved
XPN.org is made possible with the generous support of XPN Members and our Business Sponsors.