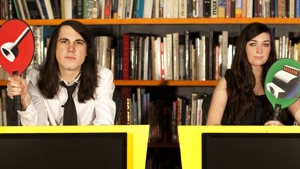 Cults has transcended their Internet notoriety.Foster The People, is the hottest band in L.A., is on its way to stardom. Both bands made our ArtistToWatch this month.

Cults - One of the two acts chosen by XPN as Artist(s) to Watch this July, Cults have a bit of a fairy tale beginning. Brian Oblivion and Madeline Follin have been together as a band and a couple for just about a year now, and they've commemorated with an eponymous debut. Oblivion and Follin met as students at NYU, and began to make music in their spare time. After the two posted a three-track demo on the popular indie music website Bandcamp, they began to get some serious buzz--in fact, the song "Go Outside" was labeled by Pitchfork as 'Best New Music'. Within a very short time after their initial viral success, Cults were picked up by major label Columbia and featured on NPR. It's rare that a band reaches the spotlight in so little time before actually releasing an album, but Cults did it. And going by the recent reception of their '60s pop collection, it seems like this little-band-that-could out of New York is not leaving any time soon.

Cults has already received another 'Best Music' label from Pitchfork for the sinister yet sweet flavor of the 11 pop-infused tracks. The sunny vocals of Follin can easily take a turn for something darker and edgier that obviously has more to do with the idea of cults. With the raspy, modern guitar riffs of Oblivion, the quick-changing pace of drum beats, and the glockenspiel-y reverb, this is a mesmerizing release--mysterious, cute, and dysfunctional all at once. Oblivion adeptly describes their music on NPR as "cautionary and romantic", taking inspiration from the "ambivalent, fascinating feelings with the concept" of a cult.

Cults have successfully transcended their Internet notoriety into real life with this release, which has charted in both the UK and Canada. After adding to the lineup, Cults is touring the rest of the summer in North America and Europe. They've got stops in Portland, Los Angeles, and the UK.

Mike Vasilikos just wrote up a great review of their debut, and the album is XPN's Featured Album of the Week - July 4. From Mike..."the intrigue of Cults is hard to ignore. And while so many bands ride that roller coaster of online buzz that skyrockets fast and descends with equal velocity, credit these two young artists who've managed to sustain much of the admiration. Let it be said, you don't have to drink the Kool-Aid to get down with Cults." Read the full review.

Foster The People - Los Angeles’ own Foster the People have emerged on the music scene this year with their debut album "Torches". Released after a highly successful self-titled EP and a string of festival tour dates, "Torches" reveals a band ready to take the next step into stardom. The five twenty-somethings that make up this indie-pop outfit are led by Mark Foster, a singer-songwriter who first began to get some buzz as a talented artist under Dr. Dre. But after impressive performances at Coachella and SXSW as well as a sold out residency, Foster the People began to slowly step into fame.

Torches made XPN's Featured Album of the Week list on June 27. You can read Mike Vasilikos' album review here. The band is on a summer tour in support of their debut, with dates into October, with stops in LA, the UK, at the Lollapalooza in Chicago, and Austin--but performances are starting to sell out. This is a band that's not going to stay on the fringes for long. And that's one of the reasons the XPN has chosen this infectious pop outfit to double-head with Cults as July's Artist to Watch.