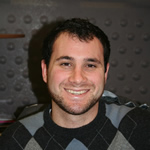 Mike spends most of his days here at WXPN listening to new music, some of which you ultimately hear on WXPN. In addition to hosting the New Music Show on Tuesday nights at 8pm, you'll hear Mike filling in for other hosts, as needed.

Musician Mike Was Most Excited to Meet

How Mike Got Into Radio

I walked into an introductory meeting at my college radio station. They gave me an on-air shift, and I never looked back.

The manager at a pizza place I worked at in college. The guy would followed his employees around, more or less re-doing whatever they just did. If I swept the floor, the boss would follow me with another broom. Perhaps the most condescending person I've ever met.

A Few More Things You Don't Know About Mike:

Graduate of Towson University, in Towson, MD, and before landing at WXPN, I was the Program Director at WTMD, another Triple A station, in Baltimore.