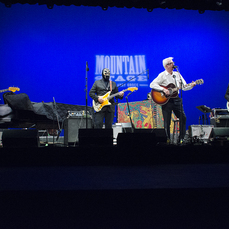 It speaks to good karma and the chameleon-like career of iconic songwriter, musician and producer Nick Lowe that, at age 70, his next musical move is not performing acoustic and alone. He is not going gently into the night, no sir. And although his mom probably warned him about this, he is riding the open roads, rocking the nation with surf-guitar dudes wearing Lucha Libre wrestling masks.
Widely known for such hits as "Cruel to Be Kind" and "(What's So Funny 'Bout) Peace, Love and Understanding," Lowe has been tag teaming with Yep Roc labelmates Los Straitjackets since 2014. The masked, instrumental heavy hitters have toured with everyone from Tom Petty and The Heartbreakers to El Vez, racking up almost 20 albums in 20 years. For Lowe, these tours with Los Straitjackets have spawned new, incredibly fresh and fun collaborative material: Tokyo Bay / Crying Inside, a four song 2018 EP, and Love Starvation / Trombone, a second EP released in May 2019.
Mountain Stage host Larry Groce gave Lowe a nod for his ability to evolve and reinvent himself, and shortly thereafter Lowe and Los Straitjackets revved up the rockabilly engines, casually throwing aces out the windows all the way to Memphis on "Without Love." Next was the sunny, jangly surf pop of the infectious new EP title cut, "Love Starvation." Lowe's voice floated over it in lyrical heart breakers like "I'll tell you something about love starvation / It's like a prison in your mind you're locked up in / Disappointment and desperation / Your two old friends."
Together they honky-tonk shuffled into "Somebody Cares for Me" and "Tokyo Bay." Like an experienced team, Lowe tagged in Los Straitjackets. The band also put out an EP in June called Channel Surfing, which included righteously surfed up versions of the themes from Game of Thrones and The Andy Griffith Show. The band showed its instrumental prowess on two Eddie Angel-written songs, starting with "Aerostar," a floating, tremolo beachscape. The group then ventured into the sand and salt of gritty surf-guitar romp, "Kawanga!," complete with band solos, including Greg Townson's tasty, Duane Eddy-esque riffs.
After a wardrobe change, a rare occurrence on Mountain Stage, Lowe came back in a fresh shirt and fell into a deep, sweet pocket with the band on a beautiful reading of "Blue on Blue." It was back into high gear for Lowe's rollicking wedding party song, "I Knew The Bride (When She Used to Rock and Roll)," before the soft, sweet landing on Lowe's timeless pop hymn, "(What's So Funny 'Bout) Peace, Love and Understanding."
Nick Lowe, acoustic guitar and lead vocal; Eddie Angel, guitar and backing vocals; Chris Sprague, drums; Greg Townson, guitar; Pete Curry, bass.
Set List: