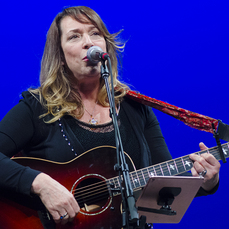 With West Virginia Music Hall of Fame member Kathy Mattea as guest host, Beth Nielsen Chapman, versatile veteran and creative queen of the Nashville songwriting scene, makes her sixth appearance on Mountain Stage since 1994.
Chapman, whose songs have been sung by everyone from Bonnie Raitt to Elton John, enlists the Mountain Stage band for a set drawn mostly from her 13th album, Hearts of Glass. This includes the message-laden opener about kindness, "Come to Mine," a co-write with Kevin Montgomery and Graham Gouldman (of English rock band 10cc). The song is based on an English phrase offering an open home as a place for comfort: "In this world full of mass confusion / Either side of the battle lines / There are places where love is blooming / And where the sun still shines / Come to mine."
A member of the Songwriters Hall of Fame who wrote "Nothing I Can Do About it Now" for Willie Nelson, Chapman tells the priceless story how the late, great Waylon Jennings left her a phone message asking her to "write him a damn song" after hearing the one she wrote for Willie. She did, and she shares the tender-hearted result, "Old Church Hymns and Nursery Rhymes."
With Sandra Groce on viola, Chapman offers the hauntingly beautiful "Epitaph for Love," written after a rough patch in a relationship, as described in the lyrics: "When I lost my place / In the center of your heart / Fallen like a star/ Caught inside a jar / Fading like a firefly / Just a note that hangs upon the step / A little epitaph for love."
Sitting alone at the piano, Chapman shares "How We Love," from 2010's Back to Love. As the first song she wrote after a benign brain tumor was removed about ten years ago, "How We Love" restored Chapman's faith in her own well of creativity that she believed had waned. "Creativity is basically God breathing. It is our chance to heal and our most powerful form of medicine we have as humans," Chapman states. "Creativity is like oxygen: some people have a deeper lung capacity than others, but you can get better at breathing in deep and creating something beautiful in your life."
The masterful storyteller and faith-filled songwriter does not leave the circle, or the sisterhood, unbroken, inviting back all of her fellow female Mountain Stage guests artists that night — Carrie Newcomer, Lillie Mae, Erin Rae, Lisa Mednick Powell, Julie Adams of the Mountain Stage band and guest host Kathy Mattea — to sing "Put A Woman in Charge." Chapman says the song, which she wrote with Keb' Mo' and John Lewis Parker, is not a political song, but a humanitarian song.
Chapman recently launched her own show called The SongSchool Podcast and she'll be featured alongside Bonnie Bishop, Radney Foster and others on an upcoming PBS special "Songwriting With Soldiers" premiering Oct. 25, 2019.
Set List: