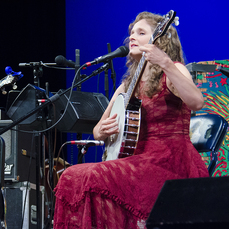 Banjo fandom won a dream team pairing when virtuoso banjo players Béla Fleck and Abigail Washburn wed in 2009.
Fleck is a 15-time Grammy Award winner and arguably the world's greatest Scruggs style player; Washburn is a clawhammer style banjoist and one-of-a-kind singer with an ethereal voice, as well as a cultural bridge builder who speaks Mandarin and has performed multiple tours around the world. The two of them have been making sweet music together for a decade.
On Aug. 4, 2019, the power couple made their fourth appearance together on Mountain Stage to perform songs off their new Rounder Records release. Echo In the Valley is the follow-up to Fleck and Washburn's acclaimed, self-titled debut that earned the couple the 2015 Grammy for Best Folk Album.
If Mountain Stage host Larry Groce introduced the talent-laden couple like family, it was for good reason: the pair has visited more than 20 times in various incarnations. "Their latest production is just over a year old and he's downstairs," Groce joked about the couple's son. "They have a couple of kids who are just delightful and so are they. So rare these two — in their music and in their lives."
With the musical passport punched, it was pure liftoff as the couple soared into two new originals: "Over the Divide," inspired by a man named Hans Breuer who worked to ferry Syrian refugees to safety, and "Blooming Rose," a song that laments a continual distancing from nature and inspired by Native American voices.
Washburn sang powerfully on both tunes before the two locked into a flowing instrumental medley. It featured the gorgeously melodic 1997 Fleck standard, "Big Country," expertly melded in between two Appalachian classics, "Sally In the Garden" and "Molly Put The Kettle On."
Washburn brought it home with the clever contemporary quilting song, "If I Could Talk to A Younger Me," before ending with the title cut off of her groundbreaking 2005 bilingual album, Song of The Traveling Daughter.
"We love, love, love, getting to come here and being a part of the family of musicians who get to come back here," Washburn told the audience. "Every time we come back it is an important part of our lives."
Set List: