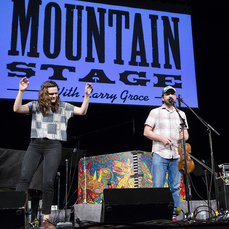 The old-time string band, T-Mart Rounders, is named after its hometown convenient store in Elkins, W.Va. T-Mart serves everything from Ramp Burgers to homemade meatloaf sandwiches, so you know the band brings zesty, mountain-grown flavor to the stage.
As savory as Aunt Willa's famous T-Mart hot dog chili sauce, the musicians in T-Mart Rounders (Jesse Milnes on fiddle and lead vocals, Becky Hill as foot percussion and Kevin Chesser on banjo) share their own original recipe for old-time music. The members of the band performed for Mountain Stage in their hometown of Elkins on July 27, 2019 at the Augusta Heritage Festival, celebrating the final instructional week at the Augusta Heritage Workshops hosted by Davis & Elkins College.
T-Mart Rounders get going with gusto with a spry reading of the traditional number "Indian Girl." Next Milnes, the son of legendary old-time musician Gerry Milnes, performs "Margaret's Song." In his haunting tune, a couple falls in love in the country, then moves to the city for work and raise kids before eventually retiring back home to life in the hills. When a tragic illness intervenes, both feel compelled to do what they feel is necessary for their true love.
"This song was inspired by a woman I met [at the laundromat] in Beverly, W.Va.," Milnes said. "I was waiting for my clothes to come out of the dryer and playing fiddle, as you do, when a woman came up to me. [She] told me this story that I put into a song."
On "Green Corn," Hill slides and shuffles her feet with the precision of snare brushes. "In case you are out there in radio land and wondering what the heck is going on," Milnes explains "That is Becky Hill doing our amazing foot percussion for us."
After covering Rev. Gary Davis tune "Got to Go Down," the Rounders close with a searing rendition of "Yew Piney Mountain." Fiddle and banjo gallop together at a break-neck pace while Hill's feet pound out a furious, stamina-testing and percussive pace.
T-Mart Rounders' self-titled debut is available online.
Set List: