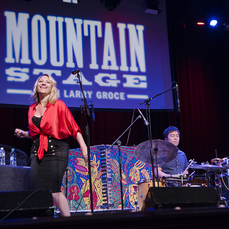 As a living testimony to his ever-flowing musical creative stream, guitar master Charlie Hunter has made five trips to Mountain Stage — all with different groups. Hunter, who has chalked up nearly 50 albums and worked with Norah Jones, Mos Def, John Mayer and D'Angelo, has kept it fresh with a duo, trio, quartet, and his group T.J. Kirk back in 1995. During his fifth visit on July 21, 2019, Hunter brought his most recent creative partner, pop and jazz singer Lucy Woodward and their friend, percussionist Keita Ogawa, to share tunes off their April-released album, Music! Music! Music! This Mountain Stage was recorded on the road in Marietta, Ohio, at Peoples Bank Theatre.
Hunter and Woodward's firecracker set features this accidental duo popping off magnetic sparks on five songs from that new record. Mountain Stage host Larry Groce first explained the serendipity of the pair getting together in 2018. Hunter had a singer cancel a tour, he contacted Woodward and that tour led to such electric chemistry on stage they fed it into this new genre-hopping album.
Groce, who called Hunter one of the greatest guitar players and a pioneer of seven and eight-string guitars, gave radio listeners fair warning of the guitar witchcraft to follow: "If you are not here in the audience, note that there is no bass player. That is just Charlie doing it all."
Woodward — who has chalked up a Top 40 radio hit, "Dumb Girls," sang backup for Rod Stewart, Celine Dion and Barbra Streisand, sang with Pink Martini and Snarky Puppy and released several of her own jazz albums — immediately shows what a mind-blowing happy accident the duo's collaboration is. Woodward, along with Hunter and Ogawa, rip into Blind Willie Johnson's 1930s burner, "Soul of A Man" and Ruth Brown's 1959 hit, "I Don't Know," searing the appreciative live audience with equal parts shock, awe and delight.
"We chose songs from 1894 to 1987, a very specific time period," Woodward said dryly, getting a big laugh from the audience before dialing the funk meter to 11 for Terence Trent D'Arby's already funky '80s hit, "Wishing Well."
While it would be easy to be overshadowed by Hunter, a virtuoso and virtual one-man band, the group pulls back the string reins for a dive into the 1958 Nina Simone song "Plain Gold Ring," during which Ogawa offers up an endless bounty of beautiful and perfectly stated percussive textures before revving up for a fast and furious, all systems go, set-ending blast of another Simone tune, 1965's "Be My Husband."
Hunter and Woodward are currently touring the U.S. and Europe this fall.
Set List: