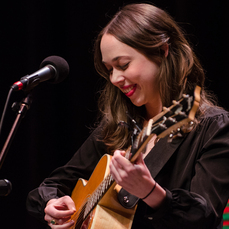 In the past decade, multi-instrumentalist and four-time Grammy Award-winning artist Sarah Jarosz has become a household name in Americana music. The singer-songwriter signed to Sugar Hill Records in the late 2000s while she was still in high school. Ever since, she has infused Americana with fresh musical and lyrical twists as both a solo artist and a member of I'm With Her, the girl-powered folk supergroup with Aoife O'Donovan and Sara Watkins.
This sublime set from 2016, recorded live at the University of Kentucky in Lexington, Ky., marked Jarosz's second appearance on Mountain Stage. She shared songs off of the month-old album Undercurrent. Layered with vulnerability and independence, the record features cameos and collaborators, including O'Donovan and Watkins, and co-writers such as Luke Reynolds, Parker Millsap and Joey Ryan (of The Milk Carton Kids).
Like a fortune teller, Mountain Stage host Larry Groce told the audience Jarosz "would soon be winning many Grammys." And indeed, the following year, she would receive two awards for her 2016 album: best folk album and best American roots performance for the song "House of Mercy."
After easing into the set with "Early Morning Light," Jarosz tuned down her guitar and dove into the deeper, darker musical and lyrical waters of "House of Mercy" and "Everything to Hide," the soul-baring song from which the title track is derived. "Do you feel this undercurrent / And the changing of the tides," she sang. "When I'm with you baby / We got everything to hide."
Jarosz closed out the set with the poignant song, "Comin' Undone," co-written with Millsap. It was, and still is, a relatable tune about living through difficult times and dealing with stress: "The world's full of bad news bearers / Talkin' heads talkin' 'bout terror / Sometimes I feel so useless / Like nothing I could do would ever improve it / But I could make the world a little better."
This performance originally aired on July 12, 2016.
Copyright 2021 NPR. To see more, visit https://www.npr.org.