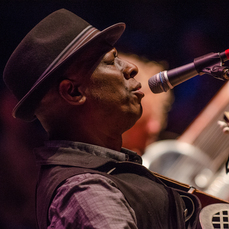 Contemporary blues artist and multi-instrumentalist Kevin Moore (Keb' Mo' for short) has always proved he can drive the blues anywhere. Moore was introduced to a world of gospel and blues at a young age, thanks to his parents who grew up in the South.
Born and raised in Los Angeles and now based in Nashville, the artist has always made a passport out of music, channeling adventures by tangling up the blues with folk, pop, rock, jazz and country. And along the way, he has made many friends, having played with everyone from Kermit the Frog and Metallica to Buddy Guy, Bonnie Raitt, Cassandra Wilson and Amy Grant.
This stellar archival set from the summer of 2014, recorded live on the campus of West Virginia University, catches the five-time Grammy winner down at the crossroads in the middle of the night, illuminating a new way with his genre-blurring, aptly titled and Grammy-nominated album, BLUESAmericana. (He would later win the Grammy for best Americana album award for 2019's Oklahoma.)
Moore rings like silver and sounds like gold on this five-song Mountain Stage set. He finger-picks his National-style Gibson resonator guitar and flows out raspy yet mellow musings on modern life blues with "Government Cheese" and "Shave Yo' Legs."
Then, he ups the tempo with drummer Casey Wasner and multi-instrumentalist Tom Shinness (who plays everything from harp guitar to cello during the set). Toward the end, the bluesman lays down his resonator, and picks up his electric guitar to close it out and drive it back home. Moore finishes the set with the inspiration-filled "Somebody Hurt You," the blues smoker "The Worst is Yet to Come" and a haunting version of "The Itch," featuring equal parts cello and electric guitar.
This Mountain Stage performance was originally published June 9, 2014.
Copyright 2021 NPR. To see more, visit https://www.npr.org.