Many Moods of Ben Vaughn

Listen
You are here: Programs //   Many Moods of Ben Vaughn

The Many Moods of Ben Vaughn

Ben grew up in the Philly area on the Jersey side of the river. At age 6 his uncle gave him a Duane Eddy record and forever changed his life.

In 1983 he formed the Ben Vaughn Combo. The band was together five years, releasing two albums and touring the US several times. They garnered rave reviews in Rolling Stone and People magazine as well as video airplay on MTV. The attention inspired Marshall Crenshaw to record Ben's "I'm Sorry (But So Is Brenda Lee)" for his Downtown album. 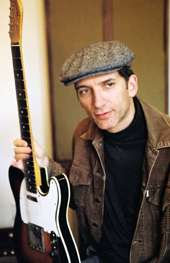 In the mid-90s Ben moved to L.A. and released Instrumental Stylings, an album of eclectic instrumentals. More recently his career has taken a turn towards TV and film as a prolific score composer. He composed the themes for the award-winning TV sitcom "3rd Rock From The Sun", "That 70s Show", "Men Behaving Badly", "Normal, Ohio," "Grounded For Life", Psycho Beach Party, The Independent, and Scorpion Spring. Vaughn has continued producing records (Ween, Los Straitjackets, the Swingers soundtrack).

Somehow, Ben found time to create the legendary Rambler '65. Recorded entirely in his car, this much-publicized album (and subsequent short film) is still considered by many to be a classic document of a man and his dream.

Despite the lure of Hollywood, each weekend Ben would leave the studio lot behind and travel to his Mojave Desert home. Driving late at night, he would tune in Palm Springs easy listening radio station KWXY and let the music run through him. Soon the arrangements of Percy Faith, Paul Mauriat and Henry Mancini became a natural part of his blood stream. Over time it became obvious to him what his next recording project had to be: a modern instrumental album combining the magic of those late night broadcasts with everything he had learned through the years as a TV composer, record producer and recording artist. Thus. Ben's latest CD, Designs In Music, a vibrant snapshot of instrumental music's past, present and future, was born. Music from the collection has been featured on television shows "This American Life" (Showtime) and "Easy Money" (CW Network).

But through it all, Ben's first love was radio. And over the years, he has kept a close relationship with the medium, producing segments for the World Cafe, guest hosting on KCRW and frequently appearing as a guest commentator on Fresh Air.