Listen
You are here: World Cafe //   World Cafe Next //   Birdie Busch and The Greatest Night

Birdie Busch and The Greatest Night 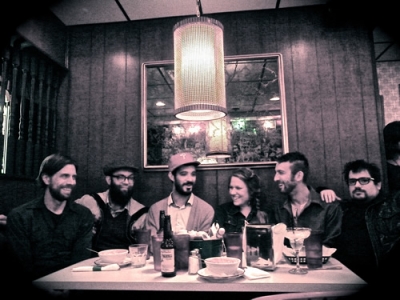 There’s something so warm and so likeable about Birdie Busch, West Philly’s whimsical, verse-weaving siren—that hearing her sing is like being greeted with a wave of energy.

March 11, 2013 - Birdie's lyrics are quirky, candid, and refreshing, and she infuses each song with a real sentimentality that makes you think she’d make a great listener and a great best friend. So when she croons—voice breaking like the sun’s rays through the trees—to “settle in for the greatest night in history,” as she does on new tune “Sitgreaves Pass”—one can’t help but wonder exactly what she’s referring to.

“It’s part this extremist idea of what anyone’s greatest night would be individually,” she remarks ponderously, over coffee at G-Ho’s Ultimo. “But then there’s also this idea of getting through a tough time.”

Celebration and struggle are two themes present on Birdie Busch and the Greatest Night, Busch’s fourth record, out now—which also delves into issues like finding time for your passions, staying focused, and staying true to yourself.

Birdie has always had a way with storytelling. A Jersey native who relocated to the city post-college, she released her first record in early 2006, then quickly established herself as a mainstay on the scene. These days, she boasts 4 full-length records (including Night), plus a handful of singles and collaborations—and an interminable love for making music.

Fans love her for her sweet, whimsical concoctions, which are one part folk, one part pop. Busch’s easy-going, conversational lilt is without a doubt one characteristic that sets her apart—and which has inspired praise from everyone from Village Voice (who compared her to Syd Barrett) to Vh1. But for Busch, success is multi-faceted, and she credits her continuing creativity partially to her band: Ross Bellenoit, Thomas Bendel, Carl Cheeseman, Todd Erk, and Craig Hendrix.

The six piece has played together for years, and Busch says they’re really more of a family. As such, their chemistry is undeniable…particularly on Greatest Night, which was recorded live.

More in this category: « Jesse Dee Duquette Johnston »
back to top