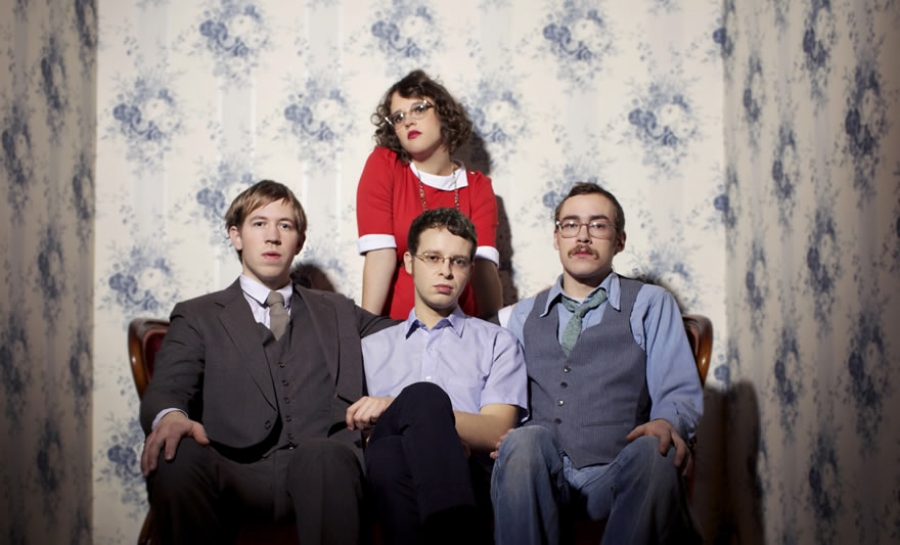 Sallie Ford and the Sound Outside are an up-and-coming indie outfit hailing from Portland, Oregon. Sallie Ford herself describes their sound as more rock'n'roll than anything else, though it doesn't take much effort to distinguish jazz, roots rock, and a healthy dose of rockabilly in their style.

Frontwoman Sallie Ford (vocals and guitar) was working as a waitress when she met bandmates Tyler Tornfelt (upright bass), Ford Tennis (drums), and Jeff Munger (guitar) in Portland. They formed a band in their spare time and began to make the local rounds in Portland, building buzz for their energetic and retro atmosphere.

Released in May 2011, "Dirty Radio" is the full-length debut of Sallie Ford and the Sound Outside. It's a lovably weird mix of Etta James and Tom Waits-esque flavors, pulling significantly from Ford's deepest influences. The result is a fast-growing fan base, including a number of big-time critics. As Paste magazine puts it, "After Dirty Radio has come to a close, it doesn’t feel as though Sallie Ford is one bit through with all she’s had to say. There is a wealth of potential in this songwriter, and it seems as though she’s just getting started." There's no doubt we'll be hearing a lot more from this talented group in the future.

Set List:
I SWEAR
AGAINST THE LAW
WHOLE WIDE WORLD

Tagged under
More in this category: « Willie Nelson On World Cafe Okkervil River »
back to top
Site Map | Help & FAQs | Privacy | Contact | Playlist | Public Inspection File | Public File Help
Copyright 2020 WXPN-FM / The Trustees of The University of Pennsylvania, All Rights Reserved
XPN.org is made possible with the generous support of XPN Members and our Business Sponsors.