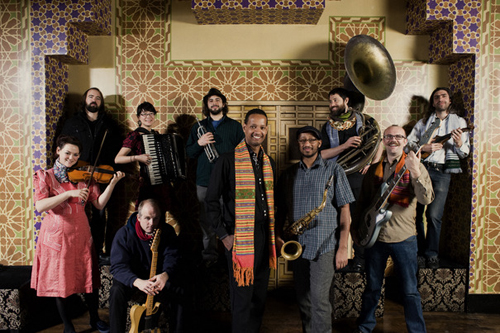 Debo Band is an eleven member group from Boston that has a sound deeply influenced by the traditional music played in Addis Ababa, Ethiopia in the late 60’s and early 70’s. This groovy harmony, referred to as Addis swing, came about in the cultural freedom of that period before a military coupe put an end to the era.
Ethiopian-American saxophonist Danny Mekonnen, who was born in Sudan and grew up in Texas, founded the band, which released their self-titled album Debo Band in July of 2012. Debo Band smoothly combines American funk, brass band music, R&B and rock all filtered with an Ethiopian soul to produce completely unique jazz. Debo has toured Ethiopia twice, appearing at both the Ethiopian Music Festival in Addis Ababa and Sauti Za Busara in Zanzibar, the largest music festival in East Africa. The band is currently touring the United Sates and will be performing in Boston, New York, Vermont, and Massachusetts.

Listen to Danny talk about the golden age of Ethiopian music and the band plays live.

More in this category: « Patrick Watson Field Report »
back to top
Site Map | Help & FAQs | Privacy | Contact | Playlist | Public Inspection File | Public File Help
Copyright 2021 WXPN-FM / The Trustees of The University of Pennsylvania, All Rights Reserved
XPN.org is made possible with the generous support of XPN Members and our Business Sponsors.