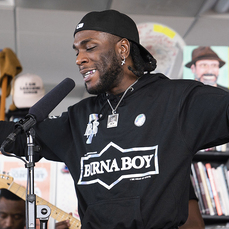 While preparing for Burna Boy's Tiny Desk appearance, it was evident early on that his performance would be strictly business. After exchanging pleasantries on the phone with his mother and manager, Bose Ogulu, she made it clear there wouldn't be time for much of anything else. "Burna has been working really hard so please bear with us," she told me. "The band will arrive well before him. Let me know the latest time at which he can arrive."
The Nigerian singer and songwriter is one of the biggest African artists in the world. He's also a pioneer of Afro-fusion which incorporates sonics and influences from a myriad of genres, laid on an Afrobeat foundation. The sound has been inescapable this year. The man born Damini Ogulu has been touring the world for the majority of 2019 and has at least 10 songs in the current nightclub rotation. Beyoncé took notice and offered him a place on The Lion King soundtrack, The Lion King: The Gift.
Sandwiched between two sold-out concerts in Washington D.C., his Tiny Desk performance offers something relatively different from what we're used to seeing at his rowdy stage shows. He's more reflective here and restrained, allowing his songwriting to shine. In the spirit of one of his heroes, Fela Kuti, he weaves through highlights from his breakout album, African Giant, that are liable to move your body as much as your social consciousness.