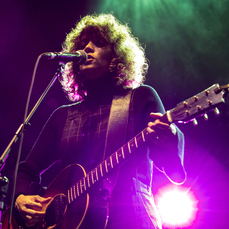 When Gaby Moreno's guitar failed her at the start of her set, she borrowed one from Justin Vernon of Bon Iver, with whom she was sharing the bill. But the guitar would barely matter — the Guatemalan singer's set was, justifiably, defined by the stunning range of her voice, which can move from righteously defiant to cracked and wounded in the span of a single note, from Spanish to English in the span of a set.
Moreno's set opened with two original Spanish-language songs, before moving on to "Illusion," a waltz in English that conjures the romance and warmth of a mid-century Victrola. Her voice brought that same, enveloping warmth and crackle to each turn of phrase, and every syllable, throughout.