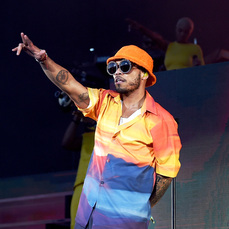 Festival season is upon us. In the past week, Coachella Valley Music and Arts Festival hosted its 19th year of memorable performances, which also resulted in memorable releases. Childish Gambino's original film Guava Island, which first premiered at Coachella, is streaming now and even though she didn't perform at this year's fest, it's been pretty a solid week for Beyoncé.
With festival season illuminating us with a constant influx of music news, public radio stations are on the search for the latest spins. This month on Heavy Rotation, Ari Lennox foresees her own future with an soulful ballad, Anderson .Paak ventures into a romantic groove and Joshua Redman Quartet reworks instrumental textures over a fresh jazz beat. Plus, hear the latest from Jenny Lewis, Y La Bamba, Ida Mae and more.
All songs from this month's Heavy Rotation are available to stream on the Heavy Rotation Spotify playlist at the bottom of this page. — Jacqueline Reed

The touch. The feel. The real fabric of our lives is love (romantic love, self-love, and sensual love). On her slow-burning hit "Shea Butter Baby," Ari Lennox bares all as she weaves raw vocals around satiny, soulful beats that would groove any fan of SZA and Jorja Smith. Combined this with the talents of Lennox's label head J. Cole, who takes on a love-drunk persona in these musical sheets. "Shea Butter Baby" gives us a glimpse into Lennox's future, not only as The First Lady of Dreamville Records, but as the goddess of R&B love. — Joni Deutsch, WFAE's Amplifier

If it seems like Anderson .Paak just came out with an album, that's because he did. Just after releasing Onxard in mid-November, AP has returned with Ventura, led by his single "Make It Better" featuring Smokey Robinson. In an interview with Esquire, when comparing the two albums, .Paak said, "I didn't want to over-produce, I didn't want to start second-guessing it, I didn't want to drive myself crazy. I drove myself crazy with Oxnard." He went on to say, "[Dr. Dre] let me have a lot of leeway on Ventura. He was like, 'It seems like you.'"
It's safe to say that Ventura is all AP. — DJ Aaron Byrd, KCRW

Kassa Overall feat. Judi Jackson, "Who's on the Playlist"

On "Who's on the Playlist," Kassa Overall, the capital-J Jazz drummer, is just as present as Kassa Overall the oddball hip-hop producer and MC. His straight-ahead prowess shines in the tasteful, brushed snare over an interpretation of Miles Davis and Bill Evans' "Blue In Green," but what makes this music feel fully new is Overall's patience for tinkering with electronic percussion sounds until a subtle perfection is reached. There's an exploration of both thoughtfulness and playfulness, both the sanctity of lineage and the irreverence of real innovation, both high art and popular music.
The scapegoating of sample-based music-making for degrading "real artistry" in the jazz idiom is a sadly popular sentiment. This effective ode to both modes doesn't just define Overall as an important iconoclast, but opens listeners to the idea that the spirit of jazz isn't fading but shifting, as it always has, to reflect the world around it. — Isabel Zacharias, KMHD

Joshua Redman Quartet, "How We Do"

Saxophonist Joshua Redman's creativity is a combination of abandon and precision, two attitudes that normally wouldn't be in the same room. For this jazz musician, merging concepts like these is the ultimate conversation, a high-wire act where a sure foot meets the anticipation of the next step.
Redman's new recording, Come What May, brings this to the fore with musical and personal friendships of two decades, pianist Aaron Goldberg, bassist Reuben Rogers and drummer Gregory Hutchinson. "How We Do" is a stop-time flurry with Redman's sax skipping like a stone across a lake, handing off to Goldberg's adventurous piano against the call-and-response of Rogers' bass and Hutchinson's syncopated drums. — Gary Walker, WBGO's music director and Morning Jazz host

"Red Bull & Hennessy" announced Jenny Lewis' latest album, On The Line, to the world. The video for the song is chock-full of Hollywood actors and indie rock luminaries, indicating that Jenny Lewis has many friends in both camps. It makes for an entertaining visual presentation to accompany a nicely constructed tune.
After a music career that has included her stint with the band Rilo Kiley, various other collaborations and several albums under her own name, Jenny Lewis wants to remind us that she is still vital. And she succeeds, starting with this song that nods to the first part of the modern partier's liquid formula for success. The second part of that formula may not be Hennessy for you right now, but wouldn't it be cool to hang with Beck and Jeff Goldblum? — Mark Simmet, Iowa Public Radio

"Faraway Look" can be heard as a yearning love song, but it is also easy to connect it to those who were dismissive of Yola's artistic ambitions. That began at home, with an emotionally distant mother who forbade a career in music (Yola knew she wanted to sing at age 4.) It continued with those relegating her to background singer status and discouraging her dreams.
Yola's persistence began to pay off when the Bristol native was welcomed with open arms in Nashville. Dan Auerbach became enthralled, helping create her debut solo album, Walk Through Fire. Together, they genre hop through the late '60s and early '70s. It's a time machine.
Lyrically, the songs are a series of personal epiphanies. Yola held fast, creating herself as she went, eventually making an album of great beauty that is filled with what she has always deserved herself, empathy, understanding and love. — Jon Hart, 90.9 The Bridge

Ida Mae is grounded in the blues and Southern rock-infused with a hint of Southern gothic thrown in, just for the pathos, on the tune "Reaching." There is no one named Ida Mae in this duo. They are husband and wife Chris Turpin and Stephanie Jean. The duo's vocals recall intimates who finish each other's sentences and their presentation recalls The Civil Wars. Ida Mae emerged out of the British music indie rock scene with the band Kill It Kid. The pair's debut album, Chasing Lights, is tightly drawn, harmonic and hypnotic and its due out in June. Ethan Johns produced and kept it raw and real, with some surprising hi-tech meets lo-fi touches. — Jessie Scott, WMOT Roots Radio

From acoustic pop songs steeped in bolero and mariachi to vibrant lo-fi rock that dances between English and Spanish, it's never been easy to predict which direction Portland's Y La Bamba will go next. Even with a decade-plus of stylistic reinvention to clue us in, the band's recently-released Mujeres comes as a surprise.
The album is sun-dappled, psychedelic, and very much a contrast to the grounded, groove-oriented roots of 2012's Court the Storm or the charging indie urgency of Ojos Del Sol. "Cuatro Crazy" finds frontperson Luz Elena Mendoza lost in lofty clouds of misty, double-tracked vocals, with spaciously arranged guitar and synthesizers leading us on a winding path in the footsteps of dream pop faves Cocteau Twins, Lush and Slowdive. The song is a dazzling reflection on art as an act of sharing ("Here is something, here is something for you" sings Mendoza on the refrain), and one that fosters positive interpersonal connections. For Y La Bamba, all of that begins with a sonic palette that's as inclusive as possible. — John Vettese, WXPN

Celebrating his 24th birthday this week, award-winning U.K. sensation Sam Fender launches into the international spotlight with the blissfully bleak "Hypersonic Missiles." It's a catchy diddy meant to (not so) subtly remind you of the end of the world, while encouraging you to live your best life, as Fender too will "give you everything [he] has."
A mortal reminder from his debut album, Hypersonic Missiles, due out on August 9, 2019, this song is a lyrical and musical treat set to make you think. — Malayna Joy, NV89

It's been five years since eager ears have been treated to new music from Ben Kweller. Following a frightening near-death experience on a trip to the mountains with his family, the indie victor was reluctant to return to the stage and studio. But with a brilliantly gritty single and an album on the way, Kweller appears to be reconnecting with both music and fans.
On "Heart Attack Kid," a steady drum beat paired with a grainy, building guitar riff will have you whiffing hints of something between Kurt Vile and Kurt Cobain. It's a glorious ear worm and as Kweller belts, "I got your back, Heart Attack Kid," fans will surely belt back that through it all, they've got Kweller's, too. — Lauren Menking, KXT