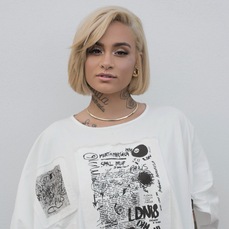 Every month, NPR member stations in our public radio network let us know what's been on repeat in their worlds to meet your music discovery and streaming needs.
You can expect an epic piano anthem from Florence + The Machine, Kehlani's sassy new dance-floor bop and an acoustic drive-by ballad by Oshima Brothers in this month's playlist. Below are some newfound favorites, all written from the voices of public radio stations across the country.

Oshima Brothers are the epitome of DIY. Only in the last year or two has the duo added to its team to help with booking and marketing. They did the story of the video to "Ellie," which follows the story of the song, written for a new friend they met at a weekend of dancing. They created the video themselves. They produce it all.
Sean and Jamie are two of the most inspirational people I've met. They perform a roots-based pop sound that is infectious and fun, and even though a little wistful, this song gets in your head and won't let go. — Chris Wienk, WEXT

Guided by Voices, "Zeppelin Over China"

Robert Pollard began his band Guided by Voices in 1983. Along the way, there have been many personnel changes, a couple of break-ups and reboots, other projects, and a lengthy solo career. But Guided By Voices is Pollard's brand; well-established in the indie rock world, with a fan base that is willing to keep up with his prolific talent. The latest "double album" Zeppelin Over China contains 32 tracks, and it's the first of three planned full-length albums from GBV in 2019.
The appeal of these songs is due in large part to the melodic, concise, guitar-driven music that Pollard writes. There are hooks a-plenty, with some songs grabbing the listener immediately, and some settling in later. There's a grandeur to GBV songs. Pollard's lyrics are stream-of consciousness, surreal, impressionistic. They invite the listener to create narrative and meaning out of what he provides. — Mark Simmet, Iowa Public Radio

Morgan Hartman, Pilar Guarddon Pueyo, and Caitlin Lindsey were constantly hanging out, but often only to watch their boyfriends' band play gigs. Although most of them were musicians in their own right, they still got some flak and "Oh, you're with the band?" attitude from others. That got real tiring, real fast. So, the women formed their own band.
Self-described as "saucy, lo-fi lady rock," LCG & the X quickly got my attention in early 2017, with four impressive, concise demos.
The Oklahoma City band's first single, "Runaway," is about escaping from everything and everyone, even yourself. Its biting guitars, sparse hand claps, and Moog synthesizer help to create a sound that falls somewhere between garage punk and dreamy power pop. It has us really excited about the band's debut studio album, which is due out this summer. — Ryan LaCroix, KOSU

Dance DJ's great gift to music has been the drop. This categorical build that starts from almost nothing and gains momentum, then builds speed, takes you higher, then hits the eject button while you're at 20,000 feet and let's you feel that free fall.
Jackson Stell, a.k.a. Big Wild takes you up that mountain in "6's to 9's." It makes sense for Stell. He has been a DJ opening for ODESZA on tour and he's been making beats since he was a teenager. He's a dance music DJ at heart, but the beauty of this track is that it's disguised as a gospel song.
Using U.K. singer Rationale to sound like an entire gospel choir Big Wild melds the best practices of a gospel choir and dance music to create a song that flips the script on everything. It will turn your 6's to 9's. — Justin Barney, Radio Milwaukee

It only takes 25 seconds for the gentle, jazzy piano intro to morph into the track's main beat. It's the first of a few fluid transitions in the first single from Royal Canoe's latest album. If you feel a little warmer while listening, that's no accident. The band's vocalist, Matt Peters told me, "The song always felt like a summer-track (partly because of the name, but it also has a brightness to it) and even though we knew the album was probably only going to come out in January, it felt like 'RAYZ' deserved a little summer warmth on it so we released it in late August."
"RAYZ" is a hook-laden plea for sun that should get the attention of mortals and modern sun gods alike. — Nick Brunner, CapRadio's Hey, Listen!

With the release of a new song by Florence + The Machine, "Moderation," fans might be asking: "Didn't new Florence + the Machine just come out?"
The answer is yes. High as Hope was released in 2018, but "Moderation" was introduced during the band's tour in January. Debuting a new series of songs out of album cycle could be a sign of something different. Florence's continually beloved star has a lot of cache. It wouldn't surprise me to hear something that embraced modern pop aesthetics or something purely EDM.
Instead, "Moderation" isn't that. It's not quite moderate either. It's tense. Musically, it's in an exercise in misdirection. Throughout the build-up, you expect it to drop the act and explode into a four-on-the-floor groove, but instead, The Machine stops, starts, twists, tricks, and shuffles, keeping you slightly off balance throughout the song until the chorus takes off and the beat obliges for a moment and Florence's vocals delivers you to Motown. "Do I look moderate to you?" Not a chance. I get why this song is an orphan. — Kallao, World Cafe

It's remarkable how the smallest cue can set off a memory from long ago. Whether it's a landmark, a melody that returns out of nowhere, a simple smell or traveling a familiar road, we find ourselves trying to decide if those reminders are the universe's way of telling us something.
"Here We Go," the latest video and song from Nashville's Sean McConnell, explores this phenomenon in a stylish, polished pop song with curiosity built in throughout. "Hearing ghosts telling me to read the signs," he sings.
By the time the music breaks down for the final, spacious chorus, you'll be recalling your own memories and looking for meaning in those mental mileposts. McConnell has said there's comfort in mystery, and a song like this one helps us embrace what we don't know, and just accept the mysteriousness as it is. That likely explains why director Elizabeth Olmstead chooses to leave the "ghost" character under the sheet. "Here We Go" appears on Secondhand Smoke, released in Feb. 2019 via Big Picnic. — Adam Harris, Mountain Stage

Josh Ritter has come a long way since his upbringing in Moscow, Idaho. Ritter, already one of the strongest songwriters on the scene, finds himself in grittier territory with the release of his latest song, "Old Black Magic." The inclusion of Jason Isbell as producer and with the backing of Isbell's band, The 400 Unit, creates music with just the right amount of heft. The combination of Ritter and The 400 Unit is magical. There is a sense of drama that give the lyrics an extra dose of power that hasn't been heard in previous recordings. Considering the turbulent times this music was created during, the music is elevated, giving Ritter an even stronger voice while taking his career and music to a whole new level. There is a lot of anticipation to hear more when Ritter releases Fever Breaks on April 26. — Benji McPhail, The Colorado Sound

Our Native Daughters, "Black Myself"

It is perhaps no coincidence that all four members of Our Native Daughters —Rhiannon Giddens, Amythyst Kiah, Leyla McCalla, and Allison Russell — are banjo players. The all-star project for Smithsonian Folkways Recordings re-claims the banjo as a symbol of African-American identity, revitalizing the black string band tradition in the process. In the roots-rocker "Black Myself," Kiah sings defiantly: "I pick the banjo up, and they stare at me, 'cause I'm black myself / Look me in the eyes, but you don't see me, 'cause I'm black myself."
What has us staring at Our Native Daughters is the blend of stunning musicianship and an unflinching telling of the black female experience. When you're bobbing your head to "Black Myself," you're feeling the rhythm and nodding to the song's truth. — Micah Schweizer, Wyoming Public Radio

Kehlani's been enjoying a hot streak of new releases lately, and the expecting mom's fast-approaching due date didn't stop her from filming a luxurious music video in the snow for "Nunya," her first dance-floor bop since 2017's "CRZY."
On "Nunya," Kehlani sends a sassy missive to a nosy ex who won't let her live now that she's moved on with her life. With a bump-and-grind tempo and soaring, diva-worthy hook, the track travels back to the sleek R&B club jams of the early 2000s, offering an emotional release comparable to one memorable breakup anthem from that era: "Let It Go" by fellow Oakland native Keyshia Cole, a cord-cutting spell that shoos away pesky, unfaithful dudes. It won't be long before cathartic sing-alongs ensue at the club when the DJ drops "Nunya," too. — Nastia Voynovskaya, KQED
This Spotify playlist is updated monthly.