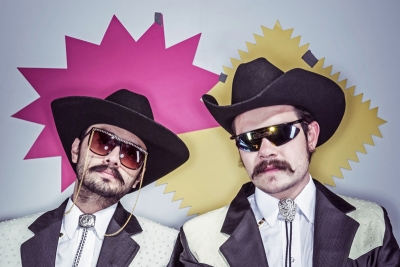 Josh begins by talking about how the first South American rock bands of the 50s and 60s were all cover bands, often singing in English.

The covers that come out now are more Latinized and musically interesting in his opinion. The first song he plays is his favorite cover from last year by a Mexican band called Los Master Plus. They first broke out with a cumbia version of Kings of Leon's "Sex on Fire", but since Josh is a Radiohead fan, he plays their cumbia cover of Creep, "El Extrano".
Next, he discusses one of his favorite bands, Los Fabulosos Cadillacs, and their cover of The Clash's "Should I Stay or Should I Go." The original version had background vocals in basic Spanish, so it was a only a matter of time until the song was covered by a Latin band. Los Fabulosos also had a relationship with The Clash, and Mick Jones sang guest vocals on one of the Cadillac's songs in the 80s. Finally, Josh presents a song by Senor Coconut, a German who resides in Chile. He's done a lot of covers throughout his career, including an entire album of Kraftwerk covers, but Josh decides to play his cover of "Smoke On the Water".