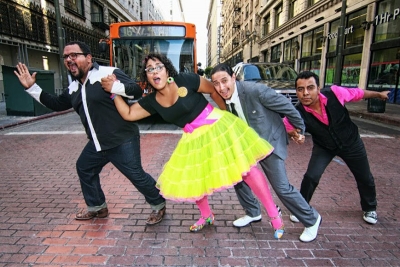 A special Latin Roots today with La Santa Cecilia in concert as part of our Latin Roots Live series. This set with the popular Los Angeles based Mexican-American band was recorded at World Cafe Live Upstairs in Philadelphia.

December 12, 2013 - The band, named after the patron saint of musicians, started playing on the streets in LA and released their self-titled debut EP in 2009.
With the charismatic La Marisol out front the band worked hard playing any and all gigs throughout North America and Mexico. Elvis Costello has become a big supporter inviting La Marisoul to sing on The Roots collaboration, Wise Up Ghost, and returning the favor with a vocal on their latest album. They released their debut major label LP, Treinta Días, on Universal Records in May 2013. Earlier this week they were nominated for a Grammy for Best Latin Rock, Urban or Alternative Album. The set starts with the title track of Treinta Días.

Latin Roots is made possible by a grant from The Wyncote Foundation.