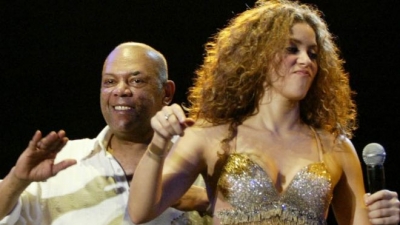 Ernesto Lechner talks about his favorite singer, Joe Arroyo, an influential Columbian musician. He began singing at the age of 10 in the whorehouses of Cartagena. He was discovered by Fruko when he was a teenager and joined Fruko's band, Fruko Y Sus Tesos. In the 1980s, Arroyo pursued a solo career. He established a unique tropical sound called "Joeson" ("Joe's sound") that mixes salsa, calypso, zouk, compas, meringue, cumbia, and Columbian folklore.

Joeson was well known in South America, but Arroyo didn't experience the same popularity outside of Columbia. Ernesto tells the story behind the song "Catalina del Mar", which Arroyo wrote for Fruko Y Sus Tesos. Even though the song is upbeat, it references the tragic drowning of his girlfriend while Arroyo watched helplessly from the beach. Next, Ernesto talks about the song "A Mi Dios Todo le Debo" which Arroyo wrote as a solo musician after emerging from a coma due to a drug overdose. In the song, Arroyo thanks God for a second chance at life. Arroyo died in 2011 at the age of 55.

Ernesto Lechner is the co-host of the radio show "Latin Alternative" and a contributing writer for Rolling Stone, LA Times, and Chicago Tribue. He's also the author of "Rock en Espanol: The Latin Alternative Rock Explosion."