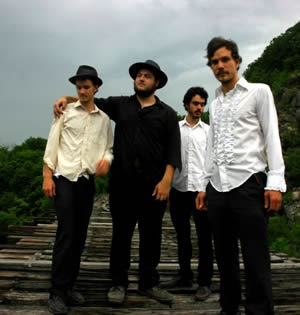 The Catskills, NY band, The Felice Brothers includes three brothers and a bassist friend Christmas. Simone, Ian, James and Christmas are known for their mischievous behavior of panhandling and traveling in a school bus. This lawlessness is clearly projected through their rough musical style, which has earned them comparisons to Springsteen and Townes Van Zandt.

With a great authentic Americana rooted sound, it was difficult for the band to be ignored and sure enough free-lance music writer Gabe Soria soon recognized the boys' potential.

In the spring of last year, they began to play shows and festivals throughout Europe and the UK after the release of their debut album Tonight at the Arizona. Recorded on Loose Records (UK), the album was widely received by audiences and after their success in Europe, the quartet is now traveling around America.

Related Links
Listen to the The Felice Brothers on World Cafe: Next at WorldCafe.NPR.org.

"We've fallen in love with The Felice Brothers' raggedy country-folk-rock and so have our listeners," said Bruce Warren, Assistant General Manager of Programming for WXPN. "The Catskill quintet recalls moments of The Band and Dylan back in the era of Big Pink however The Felice Brothers bring their own rough and tumble love of American roots music to the mix including gospel and blues."

"They have edge... they have soul... all-or-nothing grit, determination and a strong sense of history. These are songs that give a real taste of being young, broke and American," states Maverick Magazine regarding the Felice Brothers.