The Bird and The Bee: WXPN's February 2007 Artist to Watch 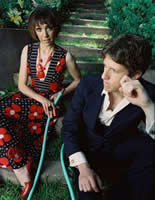 The Bird & The Bee is an adult-pop duo from Los Angeles who have been living and loving music almost from birth. Their passion is beginning to pay off in a big way.

Lead vocalist Inara George is the daughter of Lowell George, leader of classic rock band Little Feat. The slender, breathy singer has lent her voice to a number of studio recordings in the past, both guest appearing with other bands and as a solo artist. Her album, _All Rise_, was released in 2005, earning her critical acclaim for her lush, shimmering pop melodies and elegant vocals.

Offering multi-instrumental backup on that album was Greg Kurstin, and the two hit it off immediately with a shared love of jazz, electronica, and timeless pop. Kurstin provides almost all the instrumentals on the group's recordings, excelling as a guitarist and most pronouncedly on the keys. As a teen, he moved to New York to study piano as an emerging prodigy, but his loves drew him back to popular music, headlining the band Action Figure Party and working as a producer for Beck and the Flaming Lips.

The duo's debut EP, Again and Again and Again and Again, was released on Blue Note Records in October 2006, as a preview to their first full-length. Their self-titled debut LP, released by Blue Note, is a collection of electronica-scored and jazz-tinted pop gems, stepping up and downtempo efficiently and effectively to create a beautiful and unified sound.