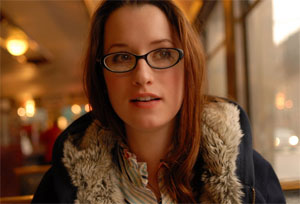 27-year-old Ingrid Michaelson may be compared to artists Fiona Apple and Regina Spektor, but she has definitely staked out her own territory in the music industry. The New York-based singer-songwriter fuses indie pop, folk and alternative in a smooth and unique way, a quality that first attracted her audience via MySpace.

Though she is currently unsigned by a record label, Michaelson has been gaining recognition from the media. On January 10, 2005 she self-released her debut album Slow the Rain, but her career has taken off with the release of her second album Girls and Boys on May 16, 2006. A few songs from the album were featured on the popular television dramas "Grey's Anatomy" and "One Tree Hill." On September 18, the album was re-released by record label Cabin 24 and in support of the re-release, she performed "The Way I Am" the same week on "Last Call with Carson Daly." This catchy and romantic tune has been extremely successful, making its way onto Old Navy and Chevrolet commercials later in the early fall. The soothing piece peaked at number 6 on iTunes and number 37 on the Billboard Hot 100.