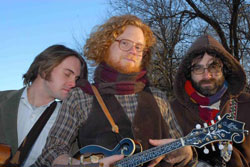 Formed in 2005 around the acoustic guitars of Sean Hoots and Andrew "Hellmouth" Gray, the two began creating a body of work that was vastly different from what either had created in the past. Often fleshing out their arrangements with organ, upright bass, drums and mandolin, Hoots and Gray saw their star begin to rise after appearances at the 2006 Philadelphia Folk Festival and last year's WXPN All About the Music festival. Blending soul, folk, country, gospel and rock with the sounds of classic Americana, Hoots & Hellmouth has, on record, lived up to the promise of its revival-like live shows - which is saying a lot.

More in this category: « Scott Matthews: WXPN's August 2007 Artist to Watch The National: WXPN's June 2007 Artist to Watch »
back to top
Site Map | Help & FAQs | Privacy | Contact | Playlist | Public Inspection File | Public File Help
Copyright 2021 WXPN-FM / The Trustees of The University of Pennsylvania, All Rights Reserved
XPN.org is made possible with the generous support of XPN Members and our Business Sponsors.