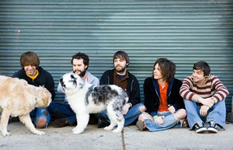 The Format is a band that won't let adversity get to them. The two times the band got dropped by their record label, they threw parties. In fact, their sophomore effort, Dog Problems, sounds carefree and happy. {readmorelink}Read More...{/readmorelink}

The self-described "desert pop" band is made up of vocalist Nate Ruess and multi-instrumentalist Sam Means with several other members during tours.

Following their split with Atlantic, they decided to release their album under their own Vanity Label, a move which gave them the freedom to do what they do best: make infectiously danceable indie pop. The ironic part is that despite their amazingly upbeat sound, their lyrics are about a failing love.

at Amazon, and find music like The Format and other XPN Artists. Your purchase that starts here supports WXPN public radio.

"The title Dog Problems comes from the fact that every time my longterm girlfriend and I got back together, we'd get a dog, thinking that it would save our relationship," explains Ruess. Listeners can actually trace Ruess' tumultuous relationship through the songs on the album: "Matches" sets the scene while songs toward the end of the album wax sentimental and almost philosophical. "Snails," for example, is a metaphor for making the most of the time we have with our loved ones. 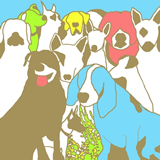 Despite all the adversity and heartbreak they've been through, it is amazing how far the Format have come in the past few years. They have performed such bands as with Motion City Soundtrack, Jimmy Eat World and Dashboard Confessional and grown a fanbase has far beyond their home state of Arizona. They have kept their fans updated through their website, by posting acoustic versions of Dog Problems songs.

Throwing dance parties after being dropped by their record label and making an unforgivingly happy pop album after a difficult breakup, the Format is determined to stay positive. They've succeeded. In fact, listening to Dog Problems may just inspire you to just get up and dance.