Listen
You are here: About XPN //   Press Room //   PR 2014 //   WXPN and Susquehanna Bank Center Team Up Again for The 2014 Xponential Music Festival Presented by Subaru 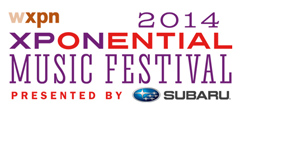 Tickets for the SBC shows go on sale Friday, April 11 at Noon

PHILADELPHIA (APRIL 7, 2014) - WXPN, the nationally-recognized leader in Triple A (Adult Album Alternative) music and noncommercial radio service of the University of Pennsylvania, announced at 5 pm ET today that it has again teamed up with promoter Live Nation to present concerts at the Susquehanna Bank Center in Camden, New Jersey on Saturday, July 26 and Sunday, July 27 as part of the 2014 XPoNential Music Festival Presented by Subaru. RYAN ADAMS, JENNY LEWIS and DAWES will perform on Saturday night, July 26, and BECK, BAND OF HORSES and THE DISTRICTS will perform on Sunday night, July 27.

“We’re really pleased to be able to work with our friends at SBC to put together a lineup of core XPN artists that we’ve been playing since their debuts to headline our weekend on the river. I can’t wait,” said WXPN General Manager Roger LaMay.
The XPoNential Music Festival presented by Subaru, now in its 10th year at Wiggins Park and its third year at the adjacent Susquehanna Bank Center, is produced in partnership with the Camden County Board of Freeholders and features a lineup of established and up-and-coming artists heard on the award-winning Philadelphia public radio station, along with a variety of family-friendly activities throughout the festival.
Wiggins Park is located on the Camden Waterfront, between the Adventure Aquarium and the Susquehanna Bank Center, and features a promenade along the Delaware River with spectacular views of the river and Philadelphia skyline, a natural amphitheatre for great sound, easy access to public transportation, lush open green spaces and the nearby Adventure Aquarium.
For more information or to access festival archives, visit http://xpn.org/xponential-music-festival.

# # #
ABOUT WXPN
WXPN, the nationally recognized leader in Triple A radio and the premier guide for discovering new and significant artists in rock, blues, roots and folk, is the non-commercial, member-supported radio service of the University of Pennsylvania. WXPN produces World Cafe®public radio’s most popular program of popular music hosted by David Dye and syndicated by NPR, and the Peabody Award-winning Kids Cornerhosted by Kathy O’Connell. WXPN also produces XPoNential Radio on XPN2 stream as its secondary radio channel in HD. WXPN serves the greater Philadelphia area at 88.5 FM, the Lehigh Valley at 104.9, Worton/Baltimore at 90.5 FM, Lancaster/York at 88.7 FM, Harrisburg at 99.7 FM and the world via online streaming at XPN.org.